We had avoided making plans for the holiday weekend until the last minute, unsure what we were in the mood for, but since it is rare to have a long weekend free of plans, we decided to check a backpacking destinations off our list. We opted for the Hetch Hetchy region of Yosemite since it takes some distance and time to get out to the remote areas there. We also figured the holiday crowds might be more likely to head to the Valley or Tuolumne.

In our typical fashion, we rolled out after work on Thursday July 2nd, and reached the Sweetwater campground outside of Yosemite by ~9pm. We’ve stopped here before and there are usually open campsites, even at late hours. Nothing fancy, but it works as a place to get some rest for a night. We got up early and were at the Hetch Hetchy entrance gate about 10 minutes before it opened at 7am (~40 minute drive). 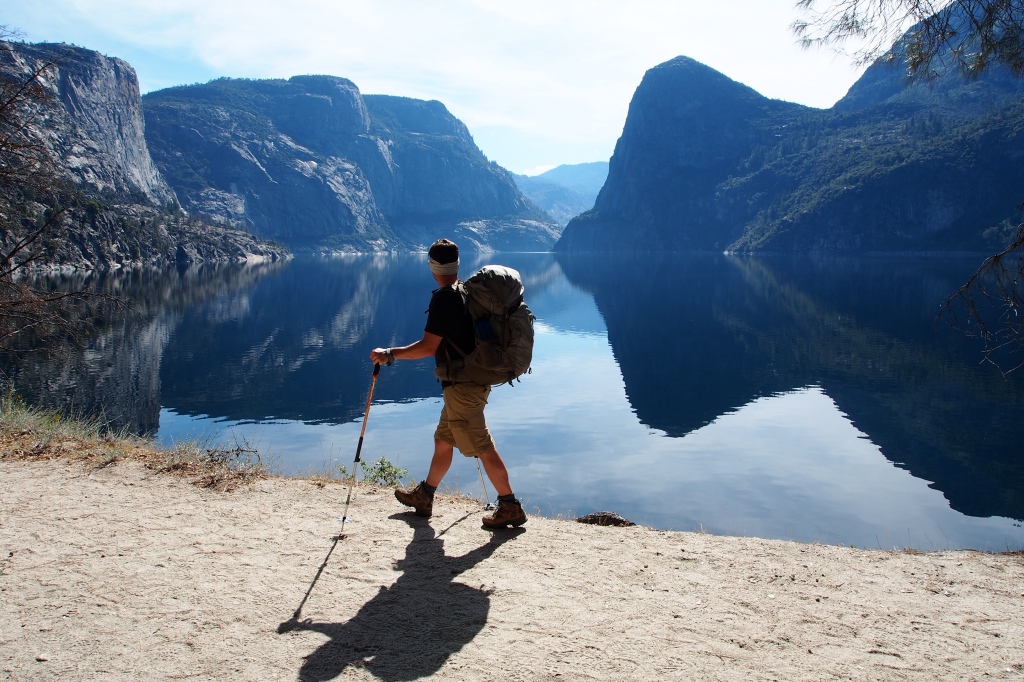 The trail starts out with great views of the Hetch Hetchy Reservoir before starting the switchbacks up to the high country.

We weren’t sure what the permit situation would be since we hadn’t booked anything in advance, but they usually leave some for the first come-first serve crowd. We had several ideas of what we might want to do and were totally prepared to accept whatever they would give us a permit for. We were in luck! The ranger issued us a permit that allowed us to camp anywhere in the Hetch Hetchy region for the next two nights. Game on.

The Beehive was filled with the most incredible variety of wildflowers we’ve ever seen! A totally unexpected perk of the hike.

We were on the trail by 9:30am, heading toward Vernon Lake where we planned to spend our first night. The 9.1 mile hike was stunning – totally blew our expectations out of the water. There was a decent amount of elevation gain, particularly as you come up out of the reservoir area, and much of that section of trail is exposed to the sun, so it was hot, dusty and challenging. However, it quickly turned into surprisingly lush, green terrain full of incredible wildflowers, particularly in the area known as the Beehive. The trail eventually wanders up to more typical Yosemite high country granite as you approach Vernon Lake. We saw a bear just off the trail while hiking, and we had another bear encounter as we were setting up camp the lake. The bear rummaged around in the logs nearby our camp for awhile searching for food, totally un-phased by our presence. Eventually, he wandered off down the lake where we got to watch him go for a swim.

The bear eventually wandered away from our camp and down the lake shore for a swim.

We followed suit and jumped in the lake to rinse off, then enjoyed the views and sunset from our comfortable campsite. Naturally, bringing the flag was a must since it was Fourth of July weekend, and I got a few other groups of campers across the lake to join me in singing the National Anthem 🙂

Vernon Lake was relatively free of mosquitos and had quite a few nice established campsites. Unbelievably, you are allowed to have campfires in this region between ~6000-9000 ft. While I will never understand why they allow this given the problem with wildfires (and the fact that it’s a sacred National Park), I do love me a good campfire.

A backcountry Fourth of July. The sunset was an acceptable substitution for fireworks. BYOF = bring your own flag.

We got up lazily the next morning, and rather than backtracking on the trail and heading up to Moraine Ridge, we decided to use the GPS and our best judgment to make our way up toward Jack Main Canyon, since we wanted to walk the section of trail that meanders through Falls Creek and a bunch of little lakes, just on the North side of Andrew’s Peak. We got to cross Falls Creek were it passes over a huge slabby granite face and produces a series of awesome small waterfalls. However, as usual, going off trail took significantly longer than anticipated since we had to gain more elevation and since we were scrambling through brush and frequently re-assessing our route. We eventually reached the trail around 1pm, and we stopped to filter water and have lunch. We realized we were moving pretty slow if we wanted to reach the Tiltill Valley by dark, so we didn’t rest for long and kept moving.

Route finding became unexpectedly hard after we turned right at the next trail junction to head toward Tiltill Valley. This trail appears to not be traveled often, so we found ourselves wandering onto game paths several times and having to backtrack to relocate the trail. We took another right at the next trail junction to head South around Tiltill Mountain, where we were viciously attacked by an onslaught of mosquitos. It was BY FAR the worst mosquitos we’ve ever seen, and most unfortunately, we left the deet in the car. We were both surrounded by a swarm of 100 mosquitos (seriously) for the next two hours, and it was miserable. It got so bad that we literally ran the next 3 miles of trail, since running was the only thing that seemed to keep them at bay. This may have been a blessing in disguise, since it allowed us to reach our destination just before dark.

Given the hot day, and the fact that we had covered a lot of miles, some of which included running with our heavy packs, we were damn tired and thirsty by the time we reached Tiltill Valley. We had wanted to stop again to filter water up by Tiltill Mountain, but the mosquitos were so bad we had decided to just keep moving. However, the biggest shock of the day was that the lake pictured in Tiltill Valley on our map, was in fact just a lush green meadow and not a lake. We had expected it to be a small lake, but still, this was quite an unpleasant surprise since we were exhausted and running out of water. We were also hoping for another swim since we were COVERED in dead mosquitos.

Connor hikes through what was left of the lake… (AKA “the lake that wasn’t”).

Luckily, the stream that feeds the “lake” was still running and there were a few nice campsites close to the stream, so just before dark we were able to throw down our things, drink our fill of water, rinse off, and enjoy the fact that the mosquitos had died down considerably. Whew. Kind of a close call. The stars came out that night for an impressive show followed by a full moon, a nice reminder of why we put ourselves through such misery. It was about 10.6 miles from where we reached the trail near Andrew’s Peak to our campsite by Tiltill Creek, and we estimated that we had probably traveled ~3 miles of terrain off-trail, making the days total probably somewhere near 14 miles, although admittedly it felt significantly longer than that. Probably should have gotten an earlier start…

Just out of view from this photo on the right hand side is Wapama Falls.

The next morning we headed back toward Hetch-Hetchy Reservoir, which was ~9 more miles of hot, dry, up-and-down trail. The views of the reservoir were fabulous. Huge granite faces plunging straight into the water. The latter section of trail traverses north of the reservoir and crosses underneath Wapama Falls – so beautiful and also refreshing since you can feel the mist from the trail. Regrettably, I was too lazy to get a good photo at the time… Fail.

All in all, it was an awesome ~32 mile loop with stellar scenery that I would highly recommend to anyone, provided that they are able to 1) push through elevation change in hot temperatures, 2) stop often for water refills, and 3) bring deet and don’t be afraid to use it. Someday we’ll come back and go even further into the lakes up North of the loop that we did.