Hong Kong – a city of 8 million people squeezed into a few small, mountainous, islands. It felt like Manhattan, if it were built on a steep slope. Separated from China by the Sham Chun River, on a map it appears that Hong Kong is being squished into the ocean by their massive northern neighbor. The towering skyscrapers of the concrete jungle mould into the actual jungle – there are trees growing out of every crack in the pavement and there are walking paths that wind up into the forests. 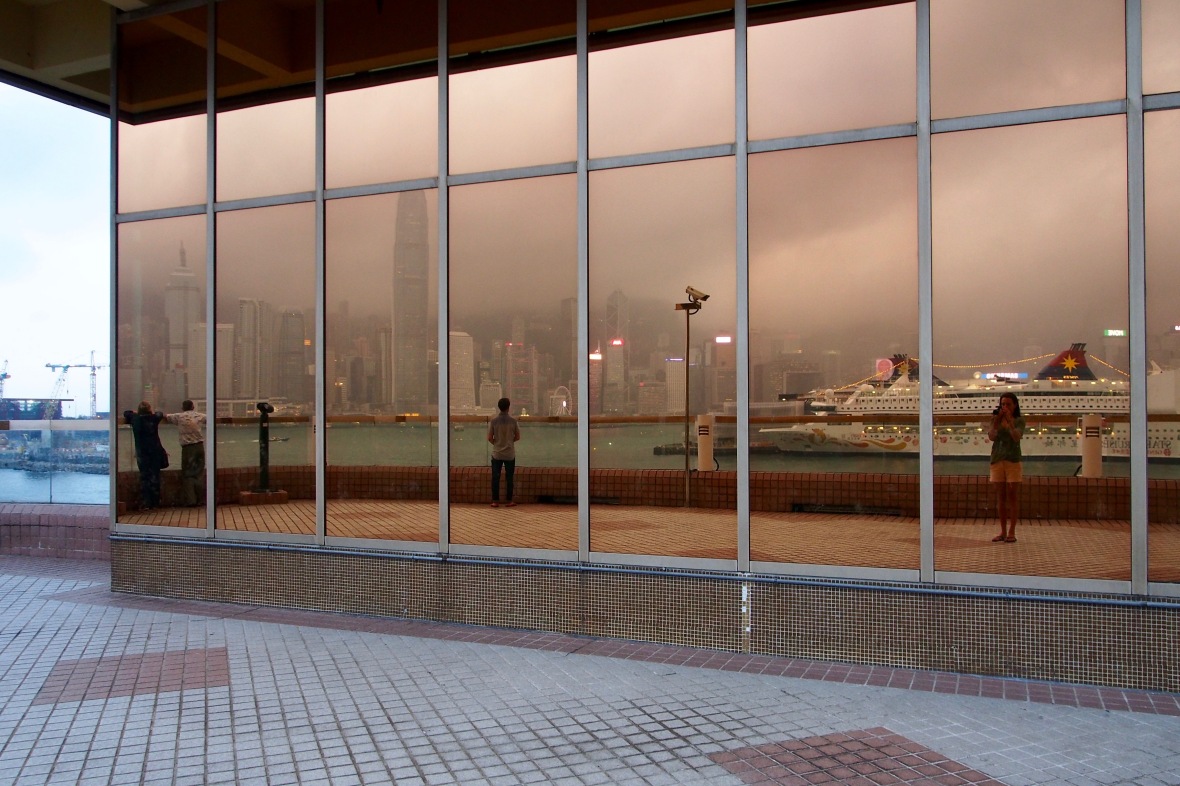 Fun with reflections by the Tsim Sha Tsui waterfront – Can you spot us?

The city feels incredibly vertical. Dozens of times, we found ourselves thinking that we’d hit a dead end before noticing a small staircase, a hidden path, a walkway through a hotel, an escalator into a mall, or some other, inconspicuous route that led to the next pedestrian area. The use of space is impressive and unique, a preview of the future for dense cities. This was especially evident in one of the hotels we stayed in, Mini Central, which embraces the “tiny house” philosophy – our room was only 107 square feet and was actually not uncomfortable. 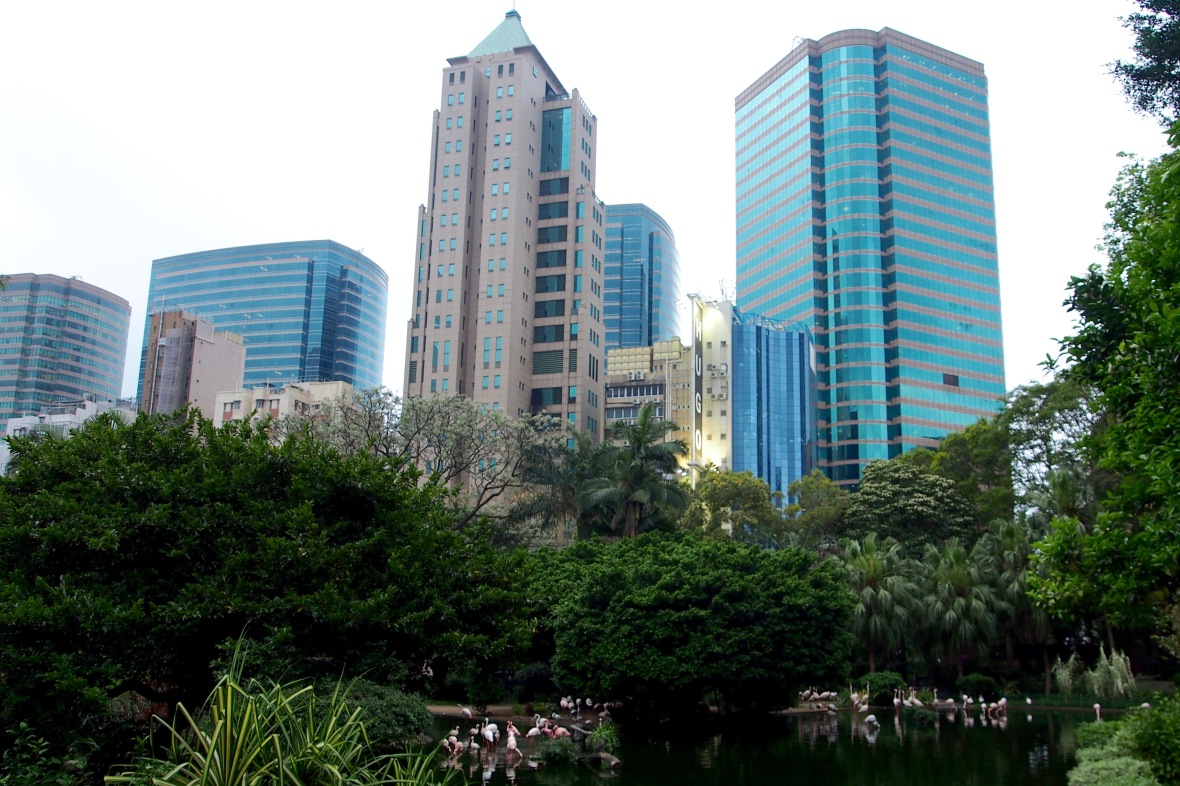 Flamingos beneath skyscrapers in Kowloon Park 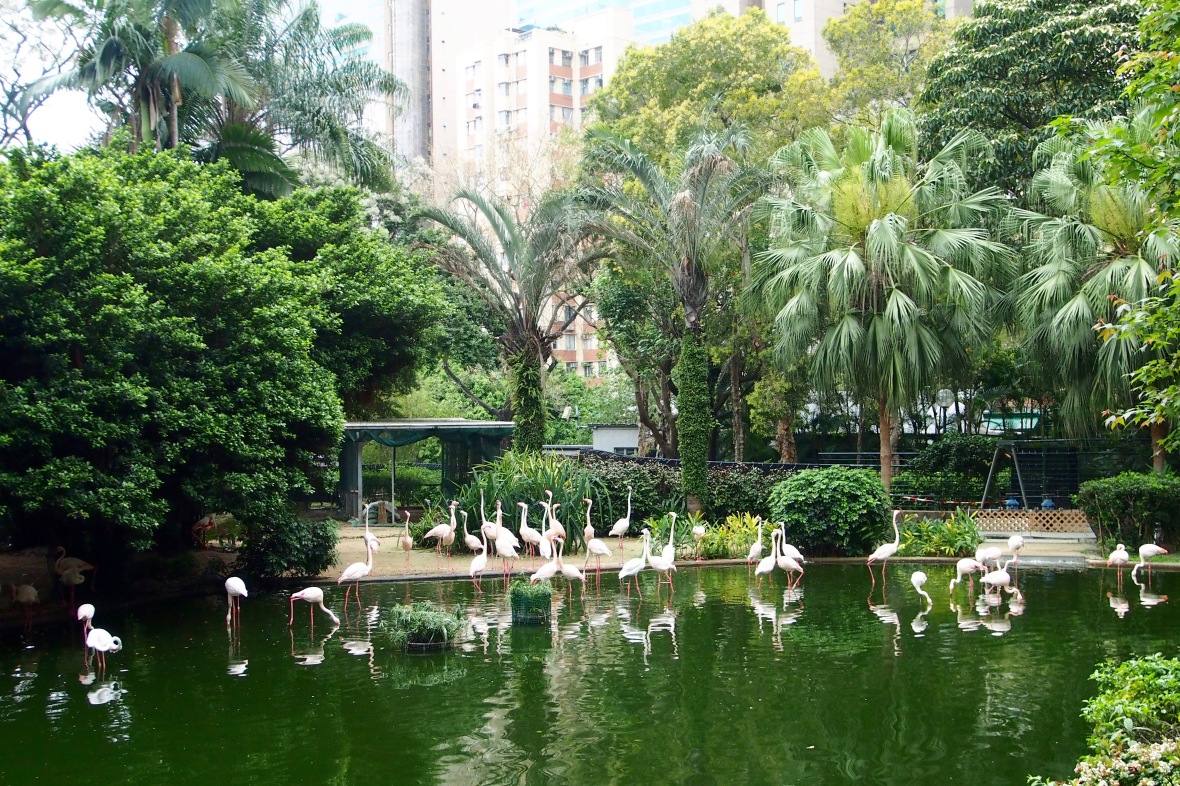 Upon arriving at the Hong Kong airport, we purchased our Octopus Cards, which work on all forms of transportation – train, double decker bus, ferry, taxis, the Peak Tram, and more. Like Singapore, the public transportation of this small city/state is dialed, modern, and affordable, making it easy to explore the area. 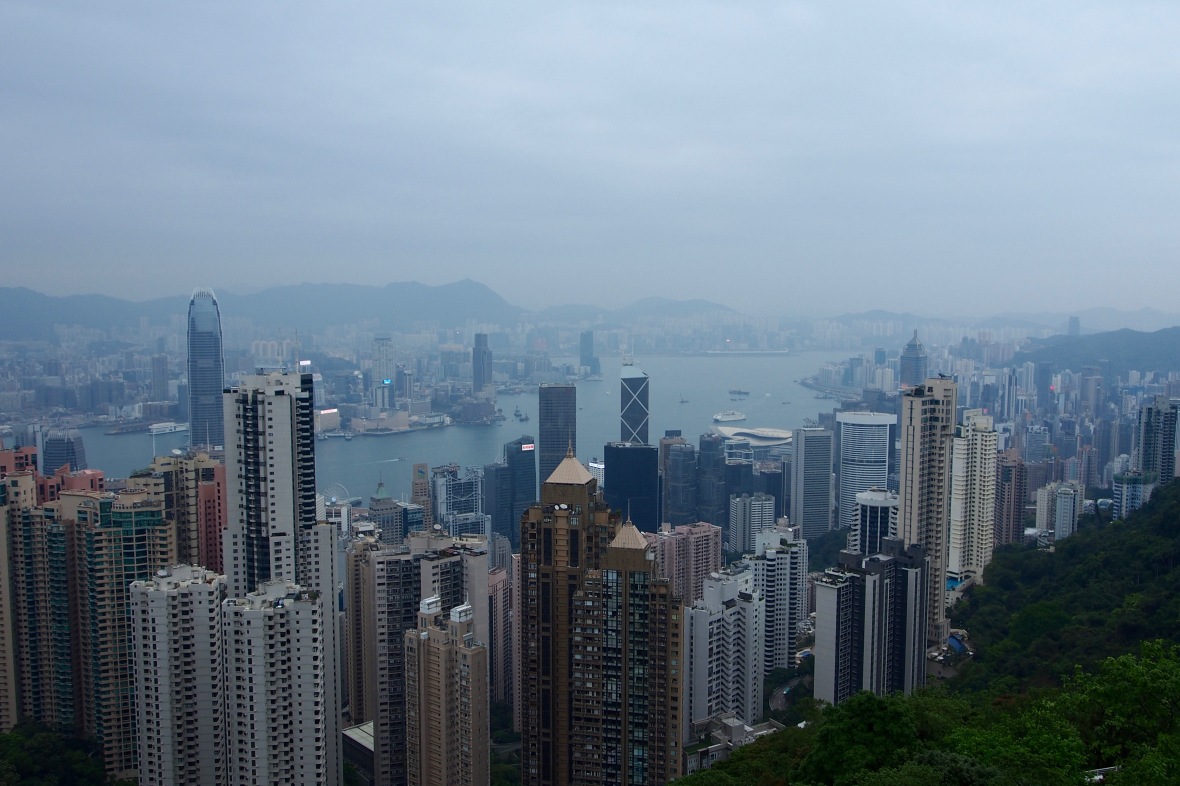 Skyline view from the top of “The Peak Tram”

As one of the world’s financial hubs and one without any space, Hong Kong is naturally an expensive city. Due to the cost of lodging (even for mediocre hostels), we decided that it was time to cash in some SPG points and book two free nights at the Sheraton Hotel in Tsim Sha Tsui, a neighborhood in southern Kowloon. Wow – after 6 weeks of hostels, staying at a nice hotel was: comfortable, clean, refreshing, and a glimpse back into our previous lives. It was a reminder of how good we had it while living in the Bay, and it was a bit motivating to think about what our future could hold. 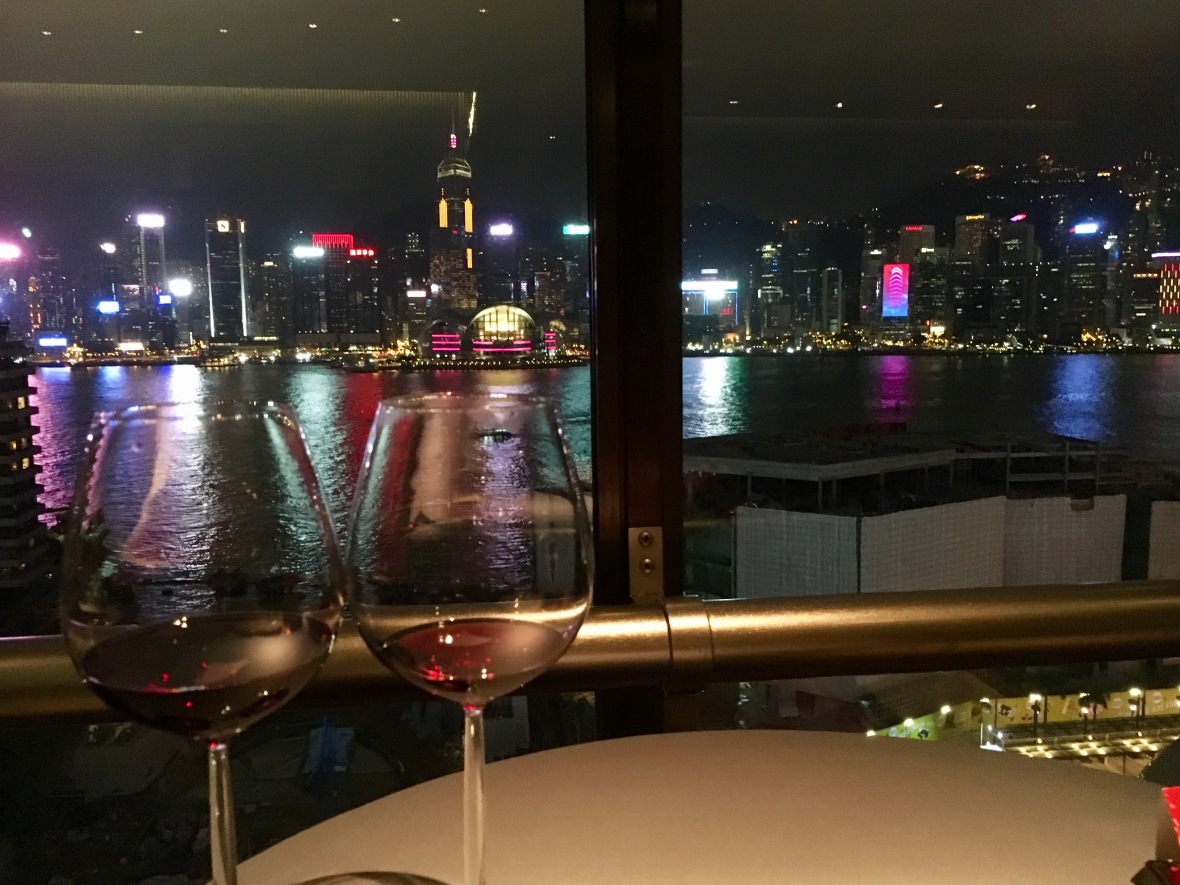 Courtesy of SPG, we indulged in our first glasses of wine since we left the USA – much appreciated!

Tsim Sha Tsui was a great place to stay not only because it offers easy walking access to Kowloon Park, the waterfront and ferry terminals, and endless shopping/dining but also because there are fantastic views across the water of the Hong Kong Island skyline. 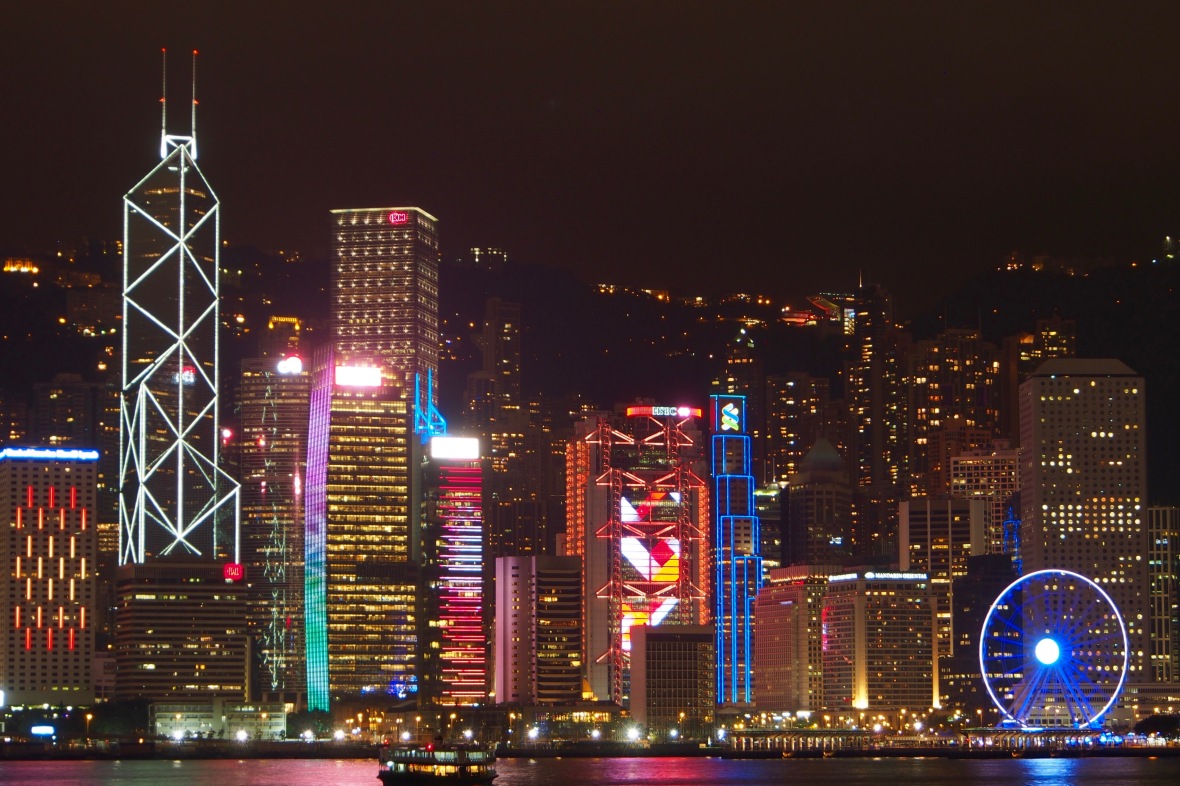 After checking in, we walked around in search of food. It didn’t take long to find a noodle and dumpling spot that had been run by the family for over 100 years. A few hours later, after wandering through Kowloon Park, walking the busy streets, and observing the dense ebb and flow of the foot traffic, we found dessert – Hong Kong egg waffles! Talk about an intersection of new and familiar, these delicious, doughy, crispy waffles are sold by street vendors everywhere and are perfect for after dinner or a mid day snack. 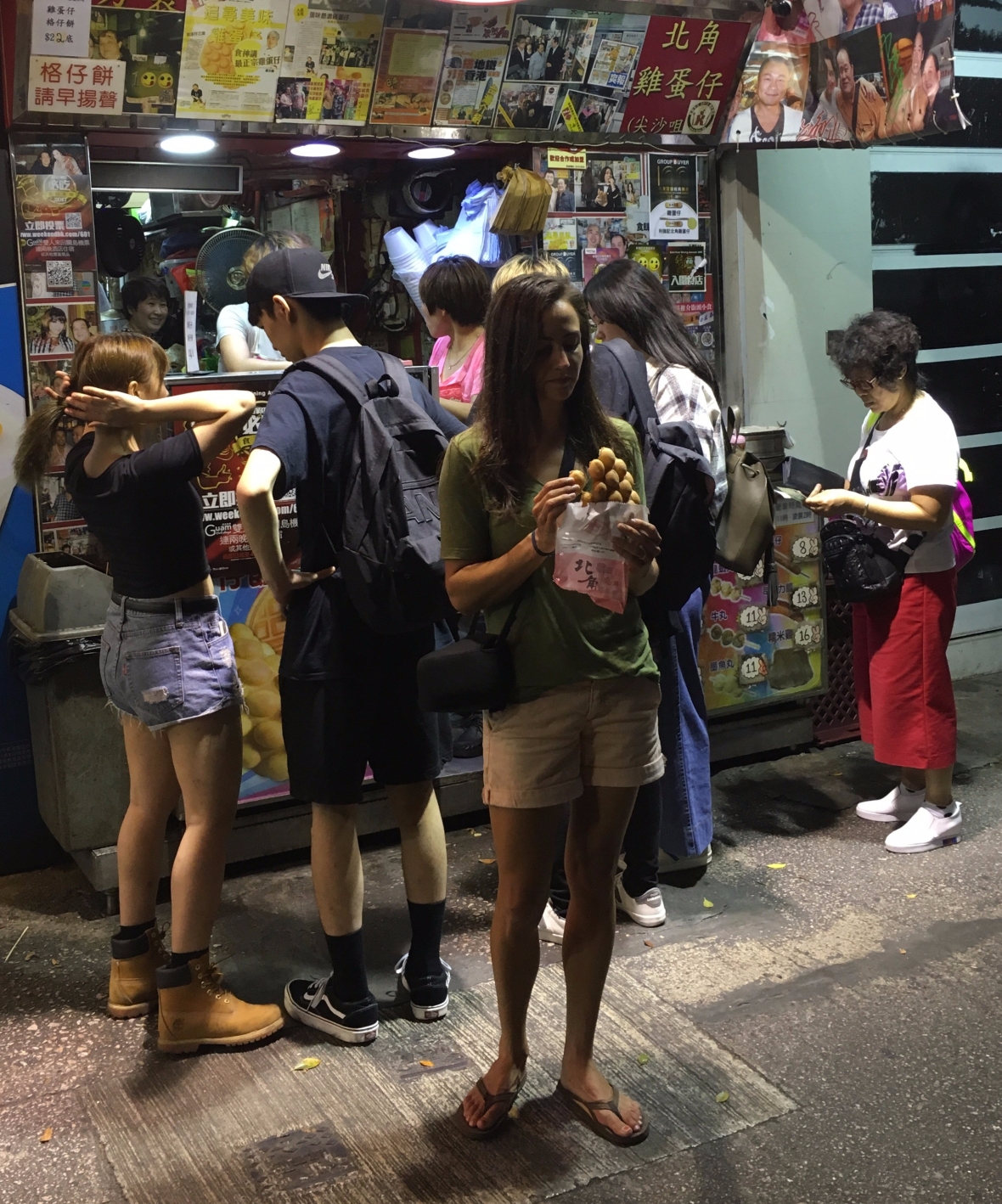 In the morning, we discovered egg tarts and chicken pies from a bakery down by the ferry.  These little slices of heaven are Portuguese in origin and are simply incredible. 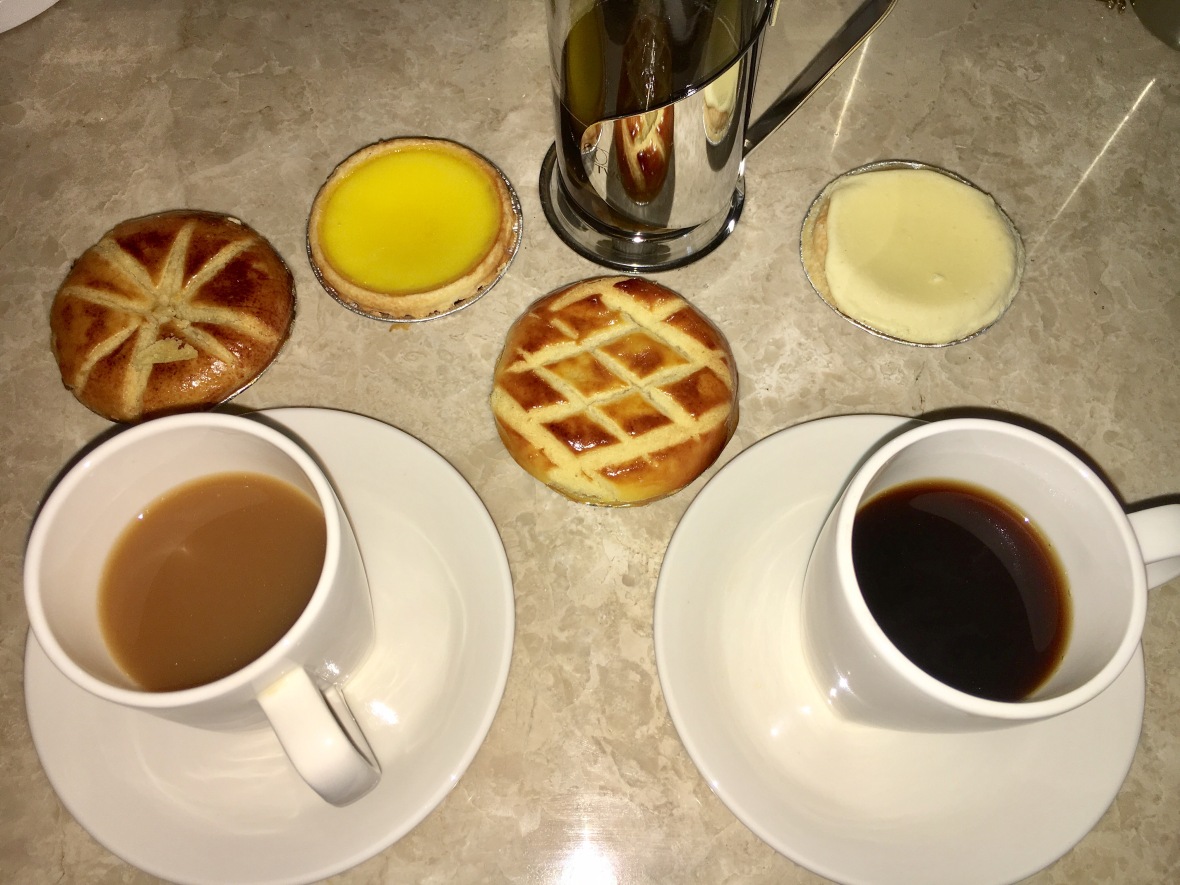 A bit later, we tried a traditional Chinese noodle soup that was surprisingly delicious! We weren’t quite sure what to expect from Chinese cuisine since we don’t eat Chinese food often at home, but we were off to a great start. 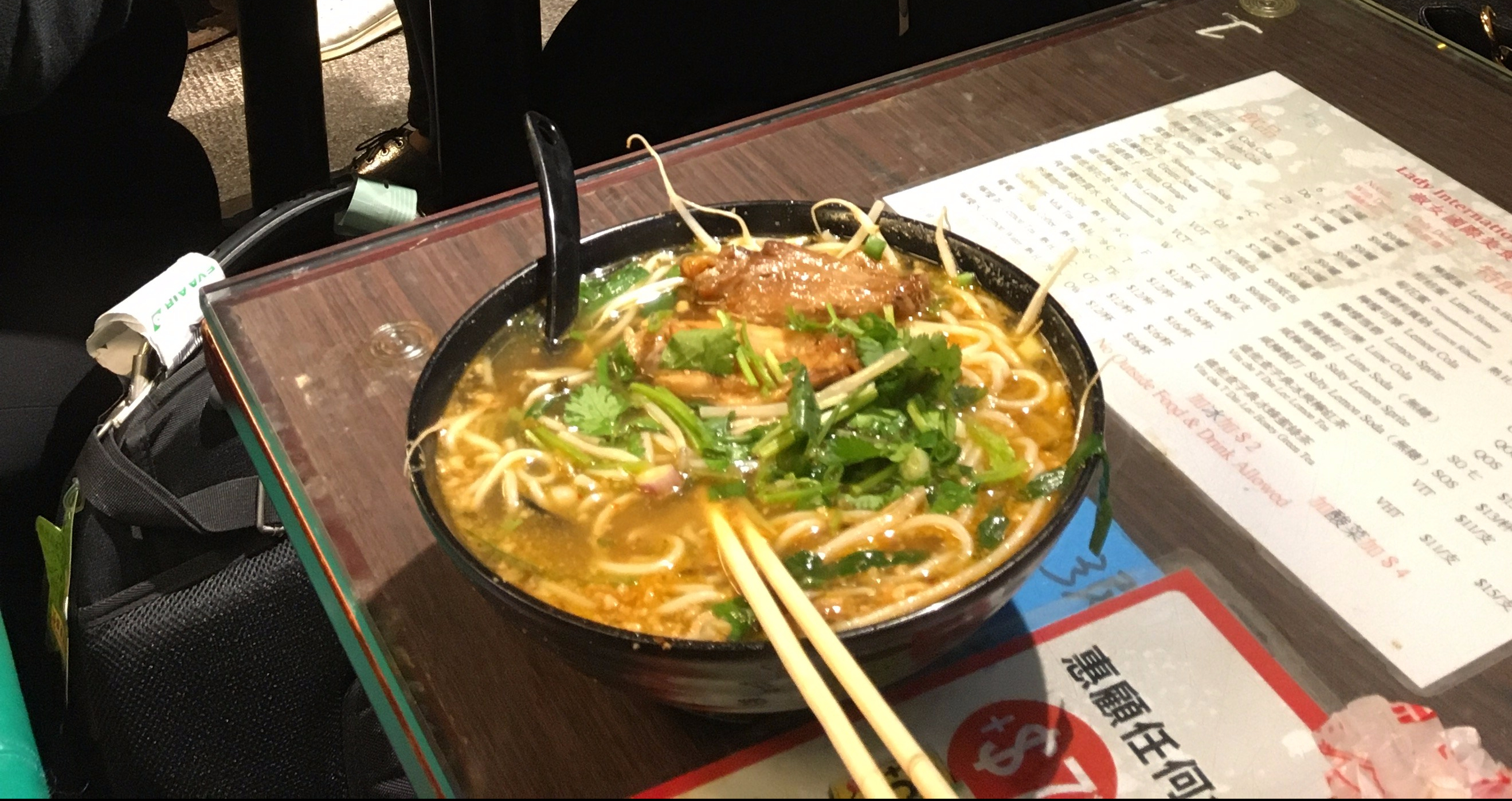 After two nights in Tsim Sha Tsui, we moved over to the Central neighborhood of Hong Kong Island for our final night. We took “The Peak Tram” up toward the top of the island – a common tourist activity. The tram has a long history in Hong Kong, and although it does go up an impressively steep hill, we wish we would have skipped this one since you can easily hike up to the same area and the wait was pretty long. 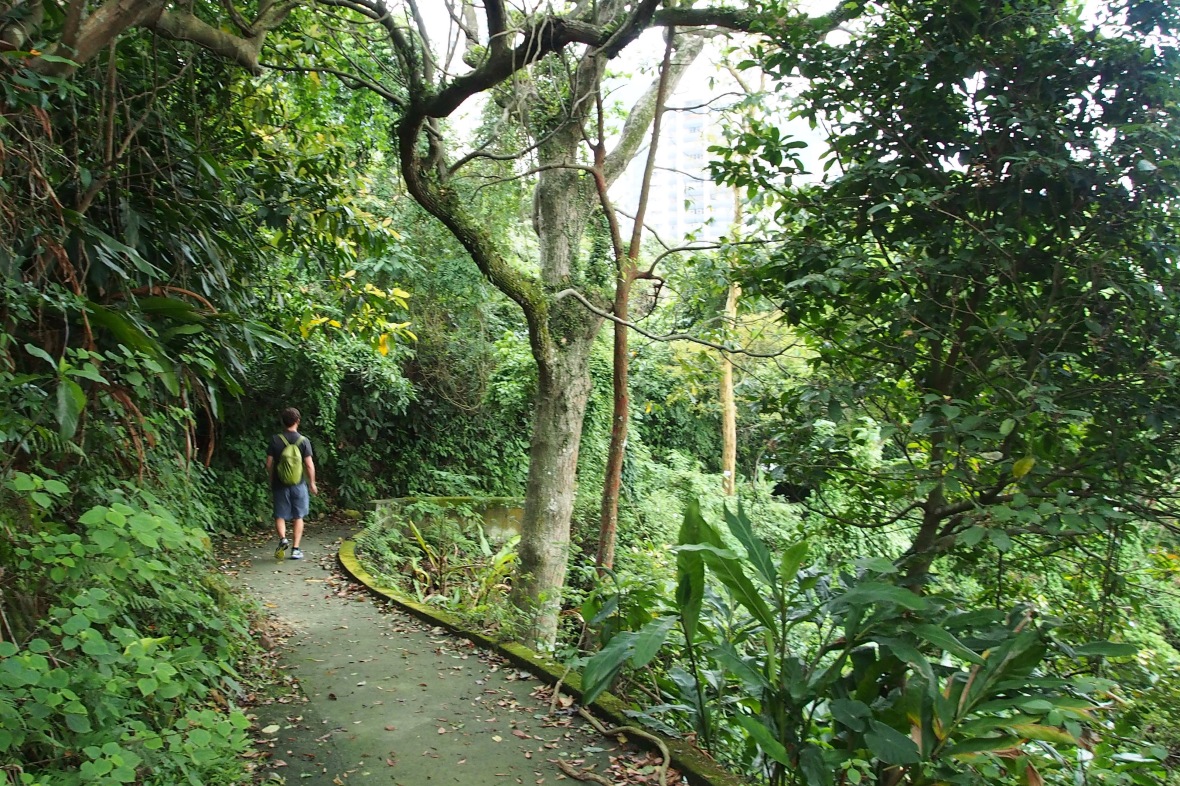 The views at the top were great, although the weather was quite hazy throughout our stay, so visibility was limited. Rather than pay to take the tram back down, we enjoyed the walk through the forested hills back to the city – if you like to hike, we recommend this scenic option. 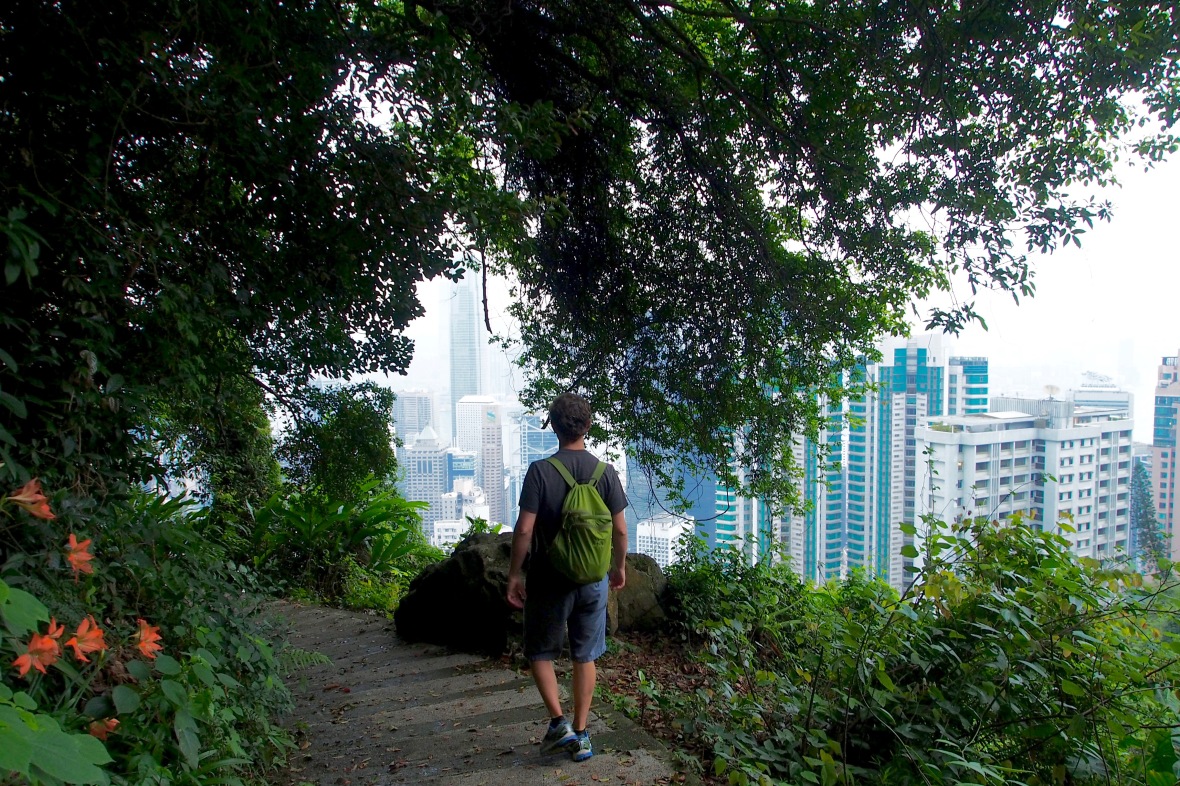 Skyscrapers peaking through the jungle on The Peak hike

The Central district had a great nightlife scene. There were bars and restaurants full of people who looked like they’d just gotten off work and needed to blow off some steam – a familiar scene for sure. We ate traditional dim sum and stopped for a round of cocktails. In many ways, Hong Kong felt like a look back at the lives we walked away from almost two months ago. 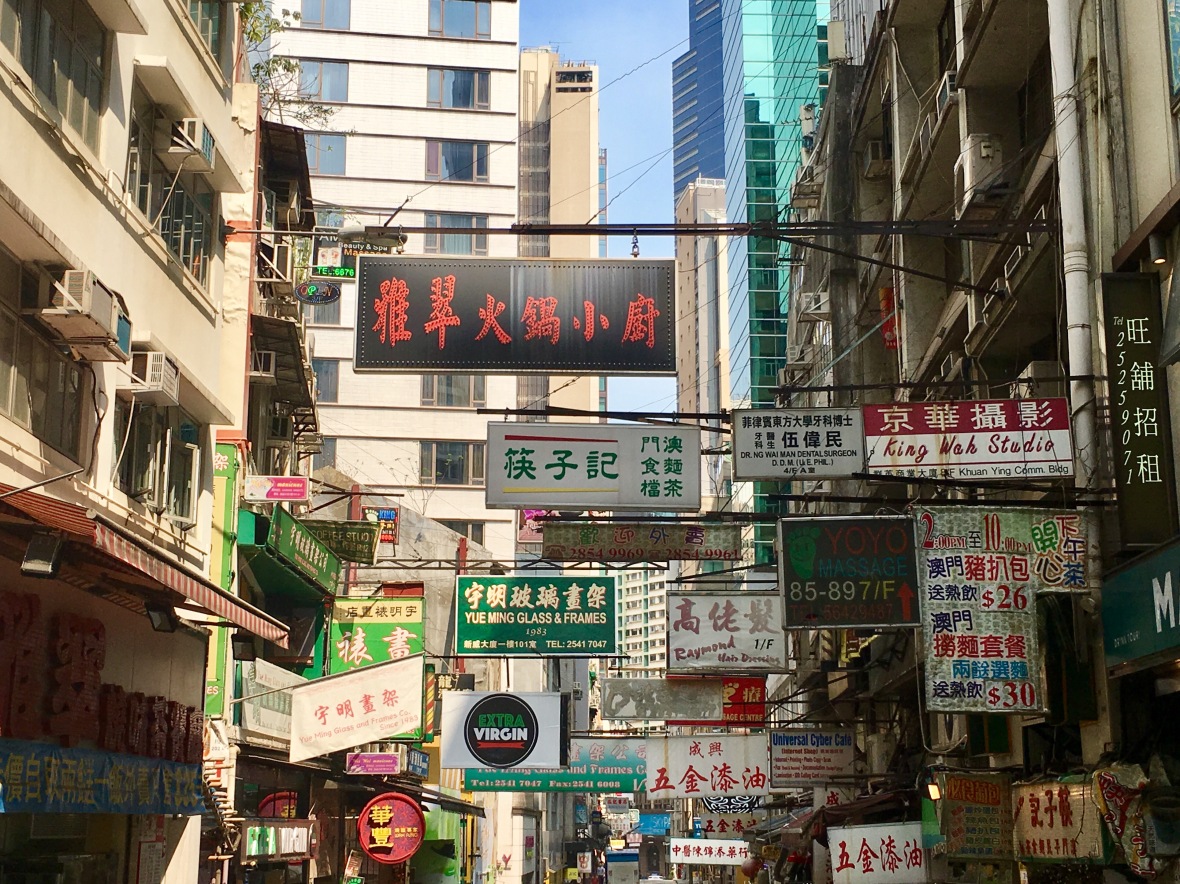 Three nights went by quickly! After one last round of egg tarts and chicken pies, we were off to the subway for our most complicated day of train travel yet, heading north to cross the border to mainland China. We felt similarly about Hong Kong and Singapore: we’d love to return some day when we are better prepared to spend money and indulge… They are tough place to do budget travel, but absolutely worthwhile cities to see. Next up, we’ll see what mainland China has to offer!

If you have any questions about our time in Hong Kong or our other travels, comment on the blog or shoot us a message on Instagram @theadventuregoeson! We’d love to share more about our adventures with you. Cheers!