Want to get away from Western tourism? Go to China. Surely there are many other places that would accomplish this effectively as well, but in mainland China, we were immediately like fish out of water – out of our comfort zone in ways that were eye opening, fun, and extremely challenging.

Full disclosure: we were apprehensive about our decision to visit China for several reasons. First, the logistical barriers are significantly greater than they are for visiting other countries. For instance, obtaining a travel visa is costly (both money and time), and the process requires you to nail down specifics for your itinerary (we prefer to travel with flexibility). Additionally, restricted internet access (The Great Firewall) blocks many useful websites, including anything powered by Google, which makes navigating a foreign country more difficult. Secondly, there are 1.3 billion people in China! This can make things challenging, depending on your tolerance for crowds and lines. Third, there is a more significant language barrier. Very few people spoke any English, and there are few (if any) English signs around the cities.

Biking through the valleys and karst hills of Yangshuo

However, while planning our trip, we saw images of the karst hills near Guilin and the mystical pillars of Zhangjiajie. We were intrigued. We also liked the idea of departing from the typical Westerner’s backpacking tour of Southeast Asia, which almost always includes Thailand, Cambodia, and Vietnam (now often Laos and Myanmar as well). No one – literally not a single other traveler that we met prior to arriving in China – had even considered coming here on their travels.

The Glass Walkway at Tienman Mountain

So, with a vague plan to avoid the biggest cities and visit four destinations in southwestern China, we pulled the trigger. We took twelve days, five trains, many busses, and a few subways and taxis to see a small part of this enormous country: Guilin, Yangshou, Zhangjiajie, and Kuming (brief nights were also spent in Guangzhou and Changsha). 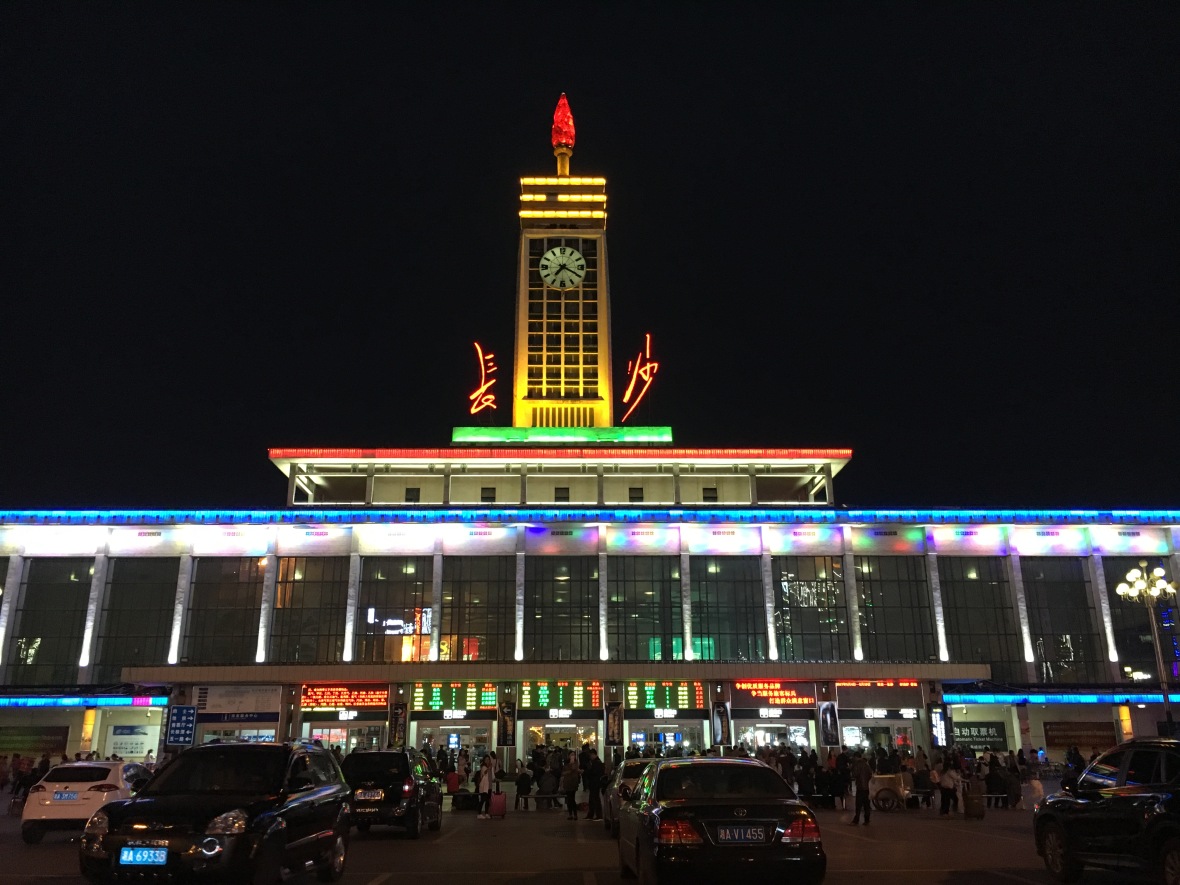 Navigating the Chinese train system can be its own adventure entirely, but with some prep/research, patience, and a translation tool (Google Translate is available offline and is basically magic), it is absolutely do-able and is an affordable way to travel the country. The high speed trains are particularly impressive! They are fast (300 km/hr), quiet, and comfortable, and the newer train stations are pretty nice.

When we arrived in Guilin, our first destination, we had a new sense of being farther removed from Western society. No one spoke English, and there were no English signs to be found. We hopped on a local bus that seemed like it might head in the right direction, and we literally just watched our location on the phone via the mobile app Maps.Me (a decent substitute for Google Maps). As soon as the bus took a turn in the wrong direction, we hopped off and walked the rest of the way.

Sun and Moon Pagodas in Guilin

Guilin itself is pleasant and walkable, with several parks and lakes near the city center and many restaurants and bars. It is bordered by two scenic rivers and surrounded by green karst hills. We were a bit worried that Guilin might feel too crowded or busy, but this is definitely not the case, even though there are well over four million people living there. And, although it is a tourist destination, there are few Westerner travelers – the large majority of the tourism in Guilin is Chinese.

Getting artsy with the locals of Guilin

We spent one night in Guilin, and after we had our fill of wandering, we took the bus to Yangshuo, where we also stayed for one night. Yangshuo is ~80 km south of Guilin, and is somehow even more scenic. In spite of the tourism scene (which they are rapidly trying to expand), the countryside of Yangshuo still has a rural, rustic look and feel. With all the construction going on in town, it probably won’t be that way for long, so we felt fortunate to see this magical place when we did. Biking amongst the karst hills and wandering rivers of this area is something we will never forget.

Yangshuo was surrounded by picturesque valleys, rivers, and hills

We were both completely swept away by this region – so much so that we actually tried to alter our itinerary so that we could spend a few more days here (unsuccessful).

The views of karst hills in Yangshuo were incredible

We hiked up to the top of Moon Hill, a distinct feature of Yangshuo and a must see. We had some serious climbing FOMO when we saw climbers on this spectacular rock.

An unknown climber on a challenging route (8a) of Moon Hill – Yangshuo, China

The climbing scene here, although still developing, is said to be one  of the best in the world. We just might have to make it back here some day with some climbing gear. 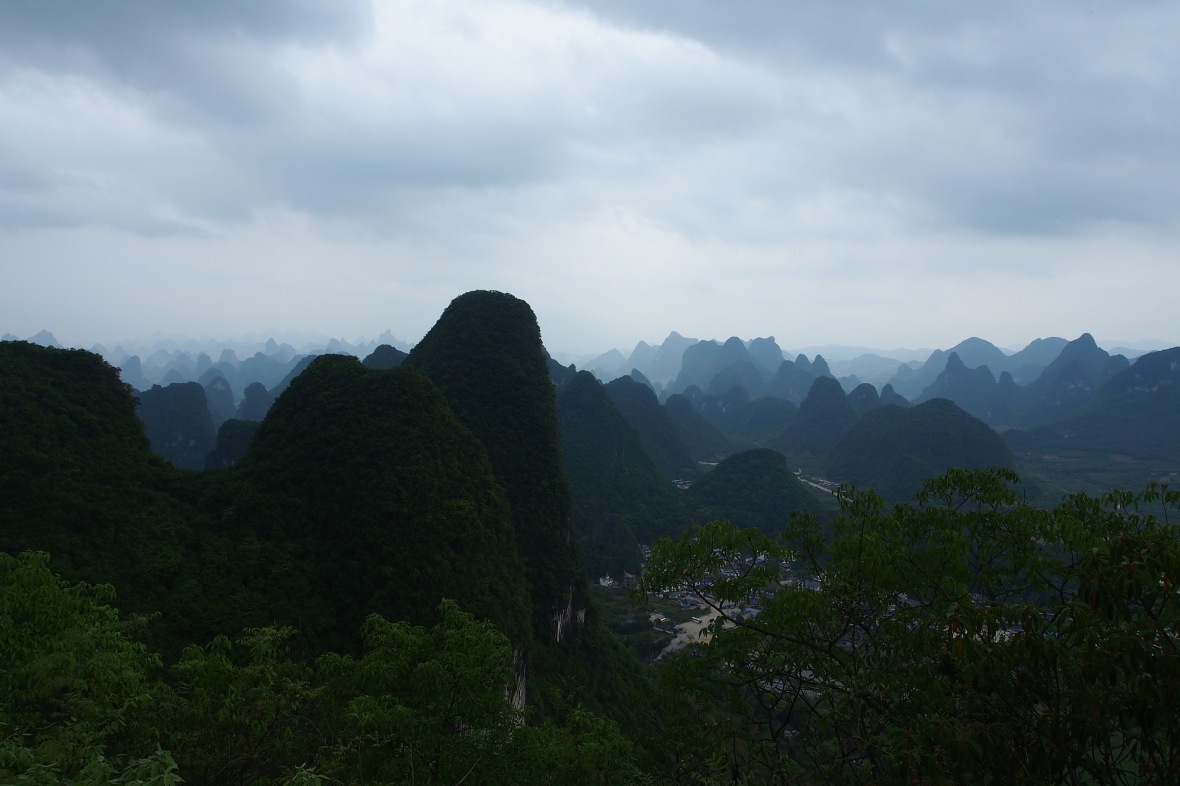 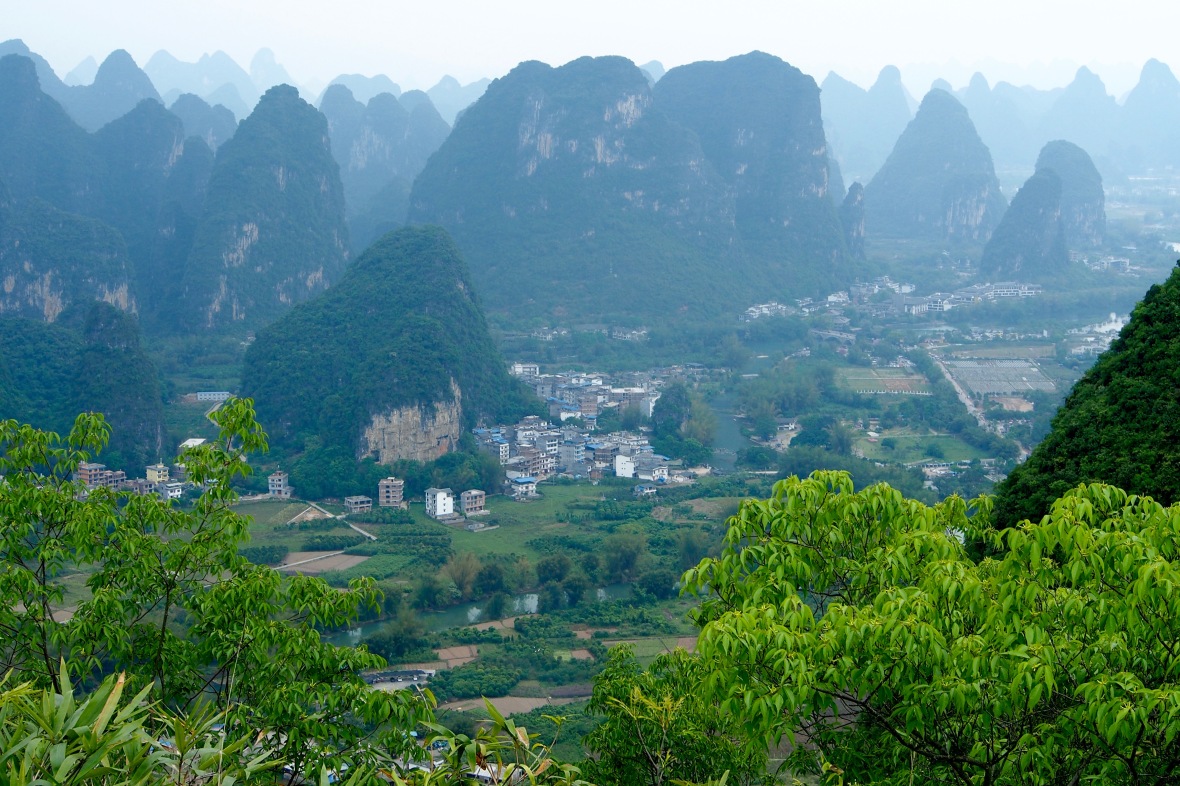 Smaller villages were nestled beneath the hills surrounding Yangshuo 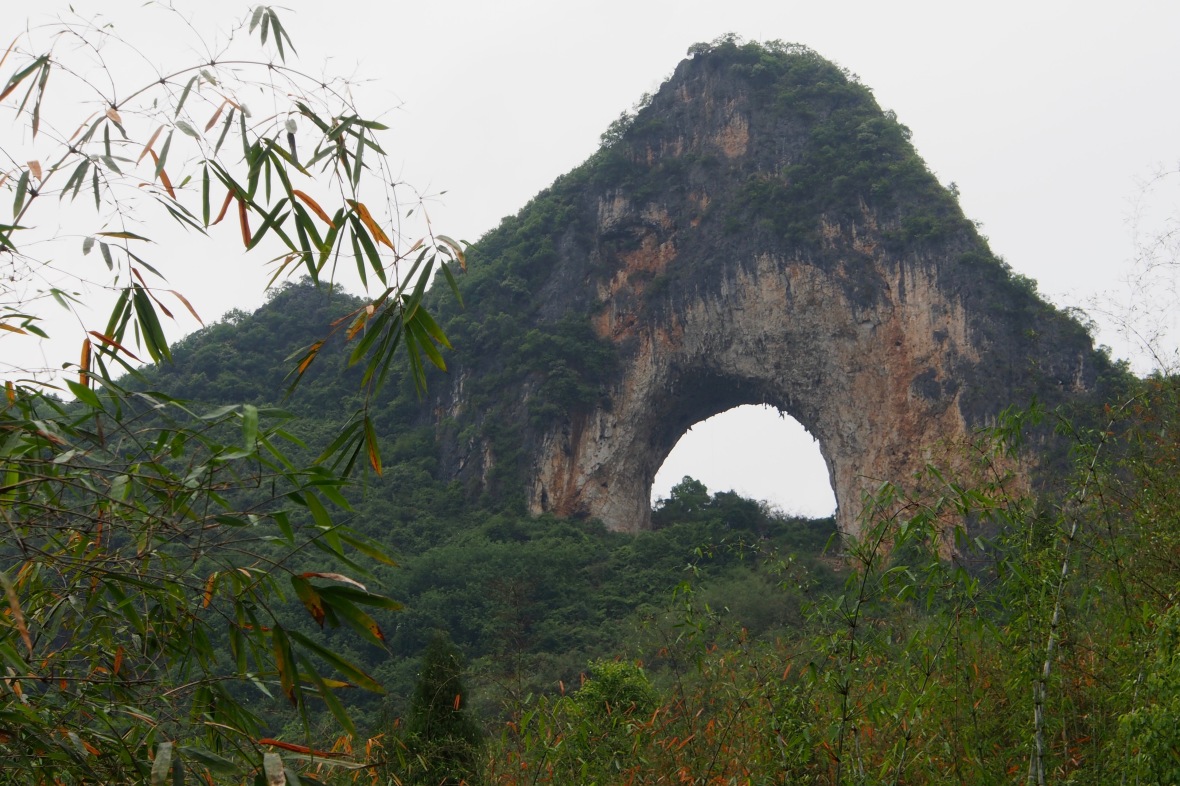 Downtown Yangshuo has a lot of bars and restaurants and is pleasant to wander when it’s still light out and the town holds its charm. Once the sun sets, the small bars/clubs compete with each other to be the loudest and most outrageous, trying to attract tourists looking to party.

View from the roof of our hostel in Yangshuo

After departing from Yangshuo, we caught the bus back to Guilin, where we hopped on our first “sleeper” train to Changsha, en route to Zhangjiajie. The sleeper train was pleasant enough, although significantly slower, older, louder, and dirtier than the high speed trains. 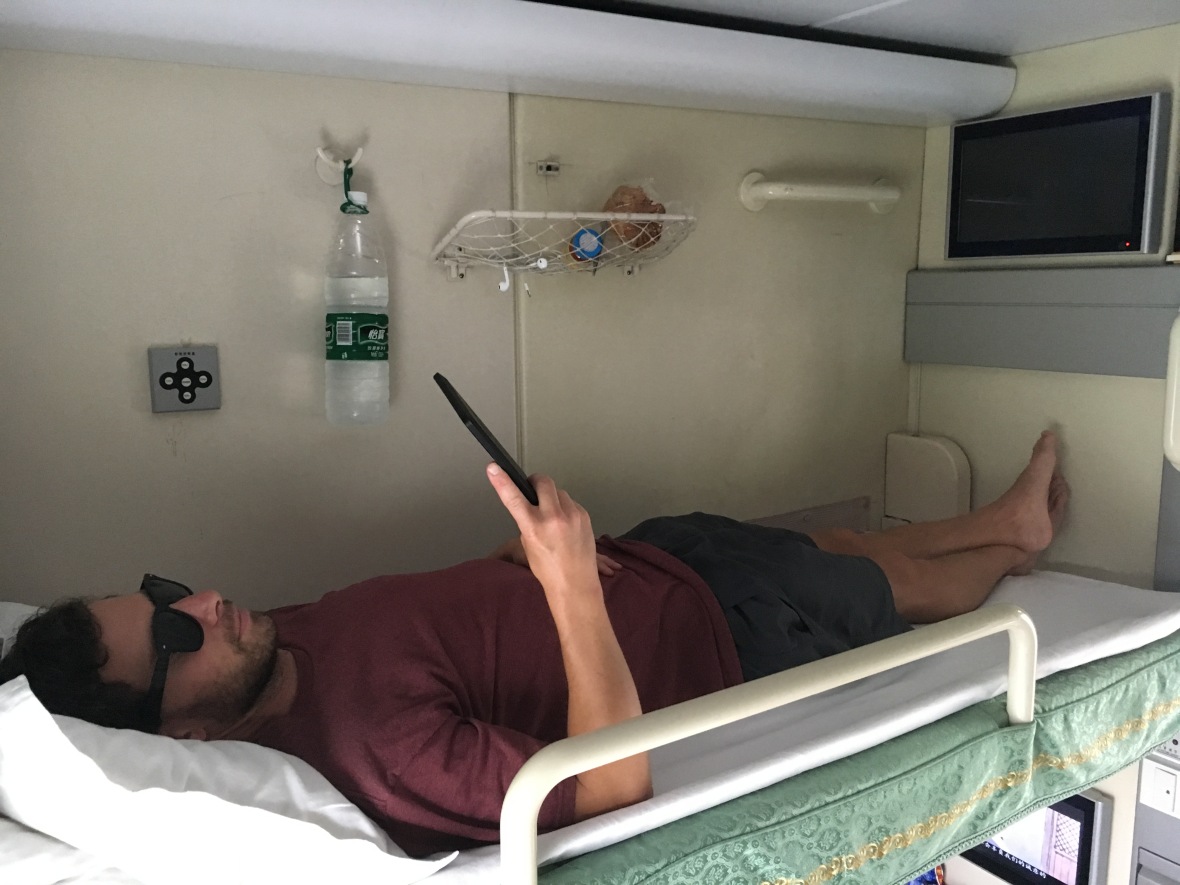 Sleeper train lounging (this is a “soft sleeper” bed – not too shabby!)

We spent one night in Zhangjiajie City, a fairly large and unremarkable city, but one that serves as an effective launching point to the various entrances to Zhangjiajie National Forest Park and Tianmen Mountain. 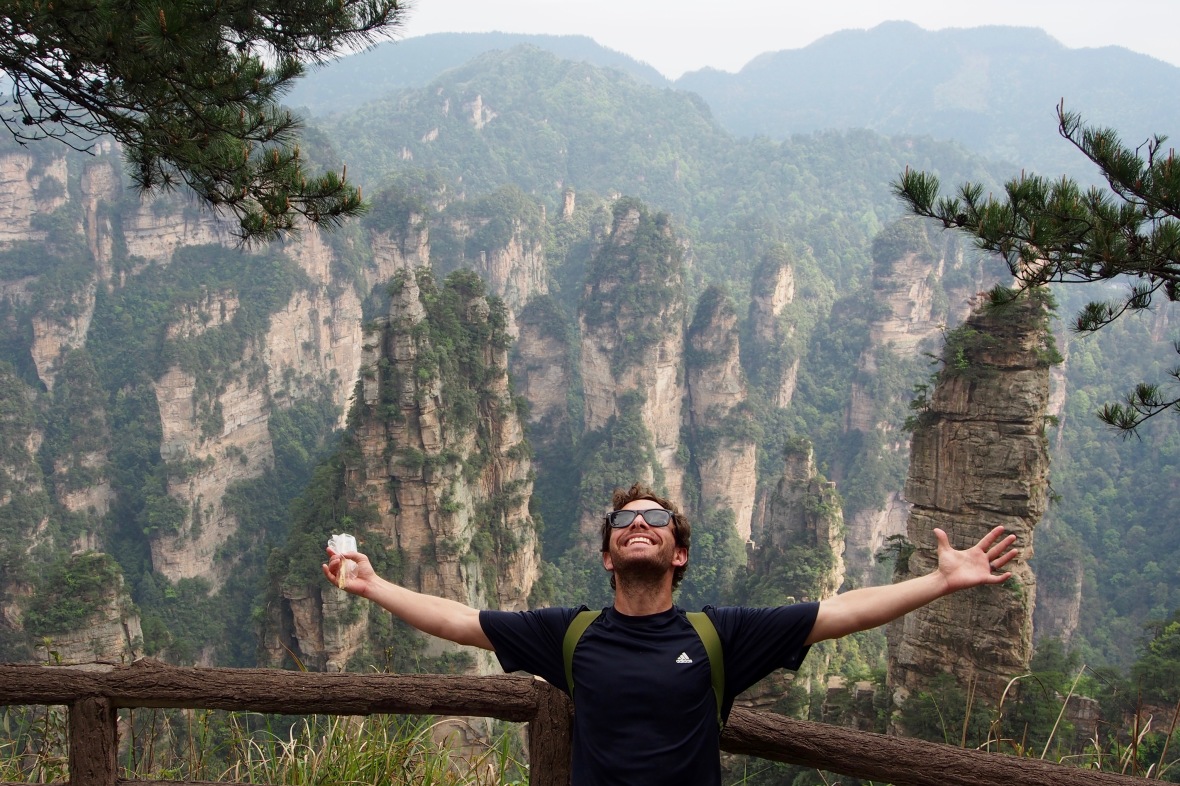 Zhangjiajie is a hard place to get to, especially for Western travelers, but the views are rewarding!

The Golden Whip stream with classic karst pillars above

With these strategies in mind, we were surprised to find ourselves relatively alone for the first half of our day (except for a few monkeys here and there). We hiked up the Golden Whip stream trail and then through the Shadow Channel. On these trails, you are hiking the valley floor through the lush, green jungle, next to the Golden Whip stream, with huge karst pillars towering above.

Can’t get enough of the wild monkeys in Asia! They’re everywhere! 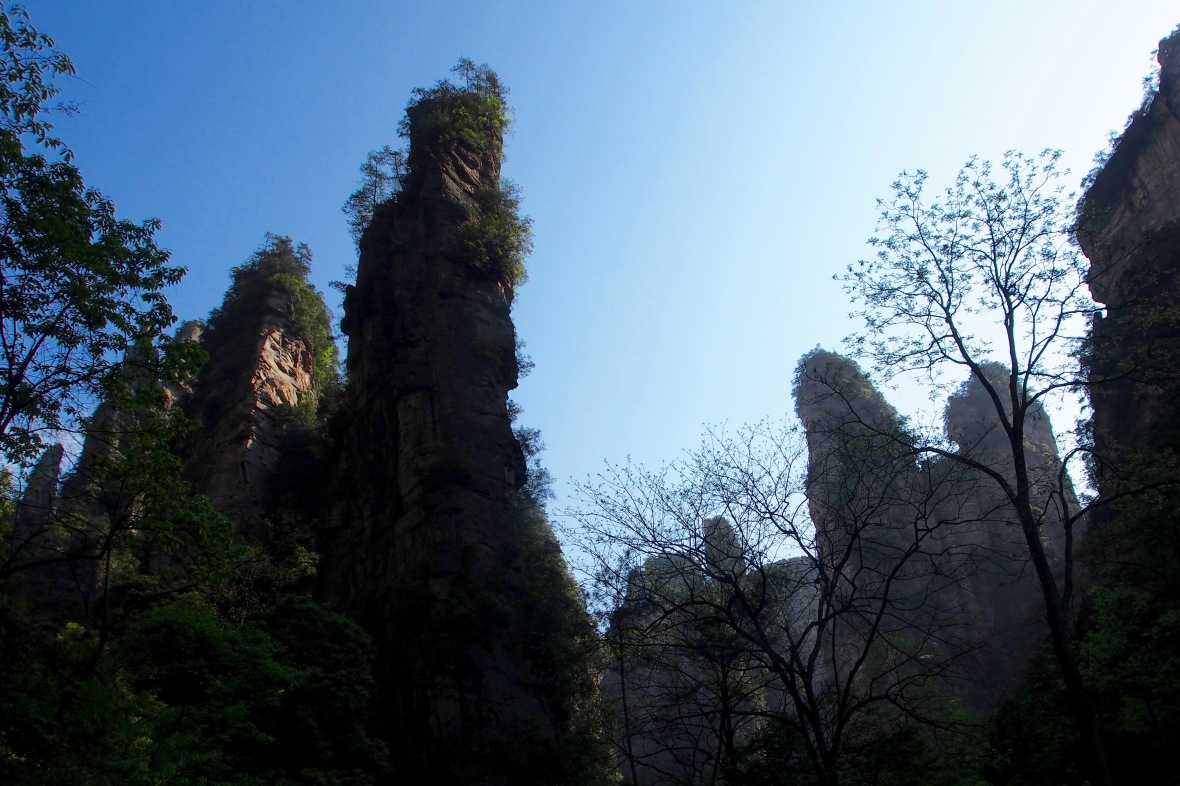 The pillars of Zhangjiajie look ripe for climbing! But no climbing allowed…

We then looped up and around to the viewing areas for the park’s most popular features (e.g., Greatest Natural Bridge, Heaven Pillar). This area was crowded, but we were able to move through it quickly and loop back out through the Golden Whip trail. 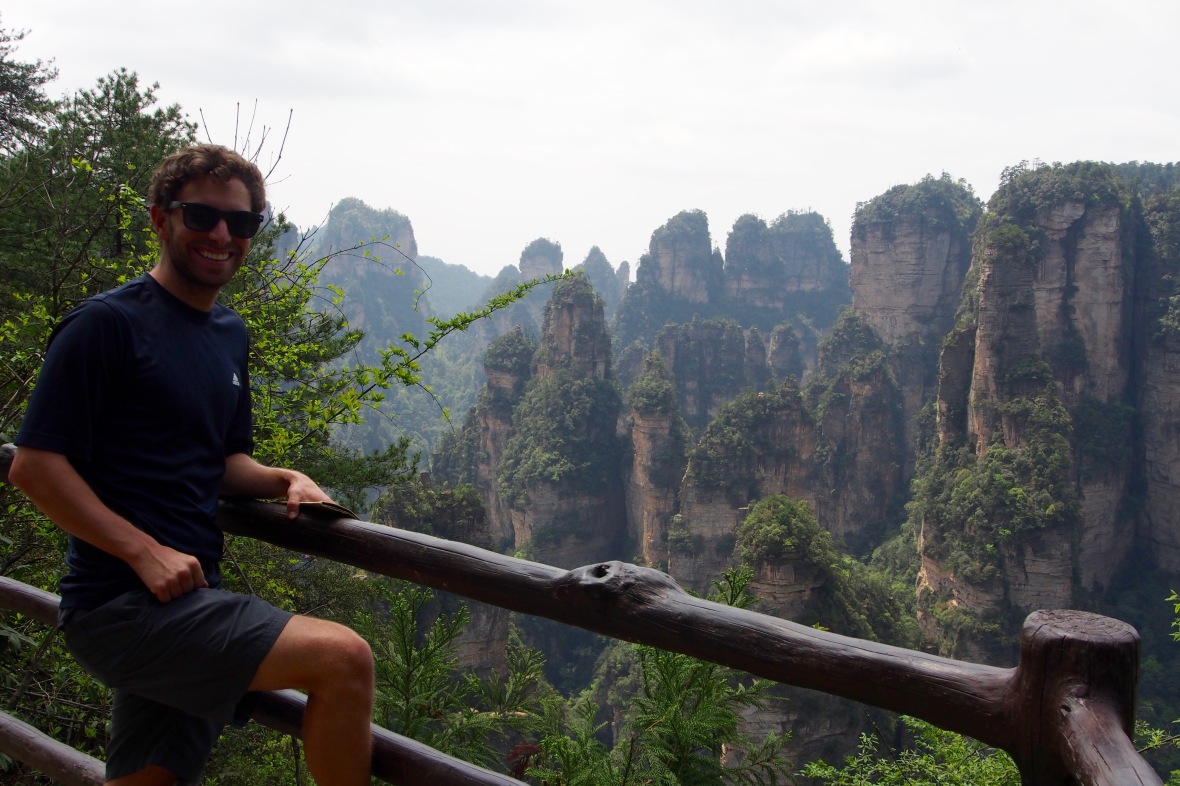 Even with the crowds, we managed to get some great views in Zhangjiajie National Forest Park

We spent the second half of the day taking the cable car up to Huangshi Village and hiking the scenic loop at the top before walking back down. This area was far from crowded, and in our opinion, the views here rivaled those of the more popular areas. This was a big day (~8 hours of hiking with only a few very short breaks), but it was worth it, especially since we had nice weather.

Our second and third nights in the Zhangjiajie region were spent in the town of Wulingyuan, which is at the opposite end of the park. Based on pictures we’d seen, we were hoping that Wulingyuan would be more of a mountain town, so we were disappointed to find poorly designed streets lined with mega hotels, the remaining areas either under construction or lying in shambles. We’ve found this to be a major theme in Asia – big, grand projects half completed, next to old, abandoned slightly less grand projects. 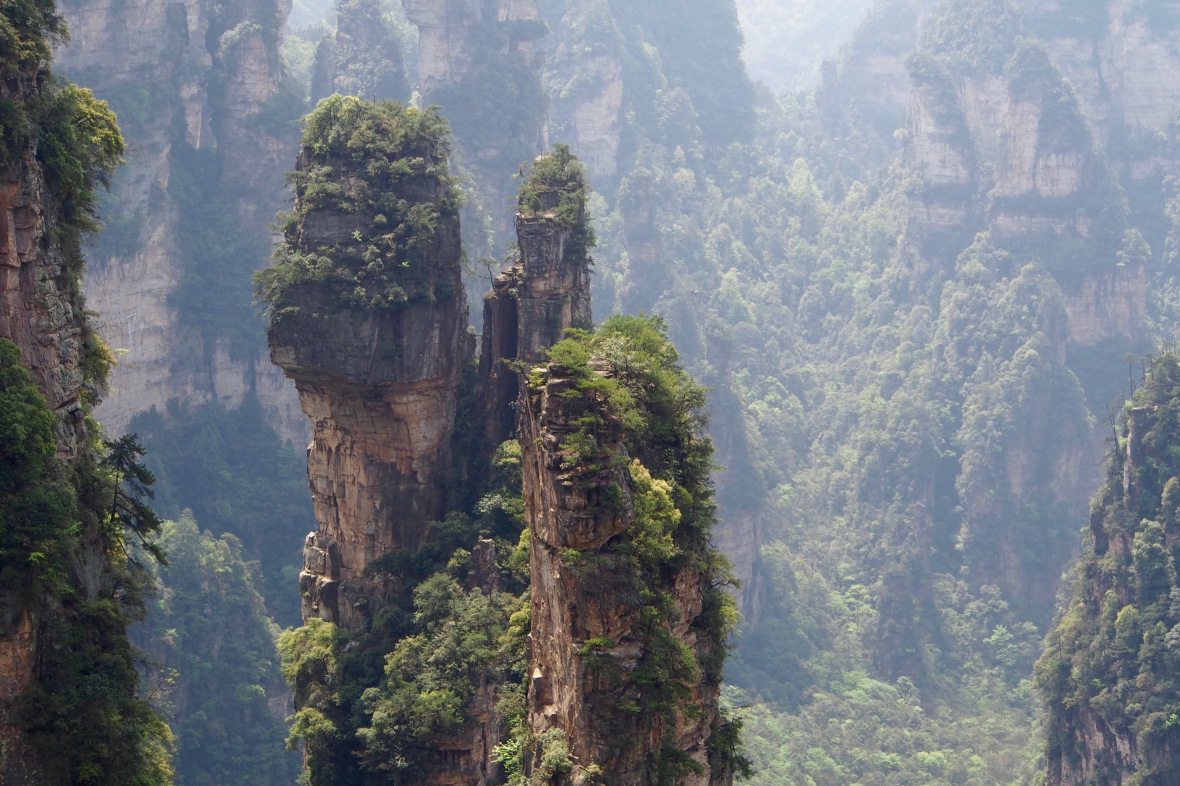 Close of up of one of the Zhangjiajie pillars

We stayed in a hostel close to the Wulingyuan park entrance, which was ideal, and spent our second day hiking to see the park attractions closer to this end. Although we had a nice morning hiking the Ten-Mile Natural Gallery and Wolong Ridge, in the afternoon, the temperature dropped, the clouds rolled it, and it started raining – hard.

Another favorite shot from Zhangjiajie

We struggled through it, hoping to snap a few shots of the pillars amidst the mist and fog, but with the heavy clouds, there was literally nothing to see. Eventually, we called it a day.

After two nights in Wulingyuan, we returned to Zhangziajie City to spend our last day in this region visiting Tianmen Mountain. We took the cable car up from the city, which offers excellent views of the mountain, and then hiked around to the various viewpoints, including the famous glass walkway.

The Glass Walkway at Tianmen Mountain

We then took the bus down the classic, windy road to the base of Tianmen Mountain. Although overcast, the weather was decent and the views from the top were well worth the trip. 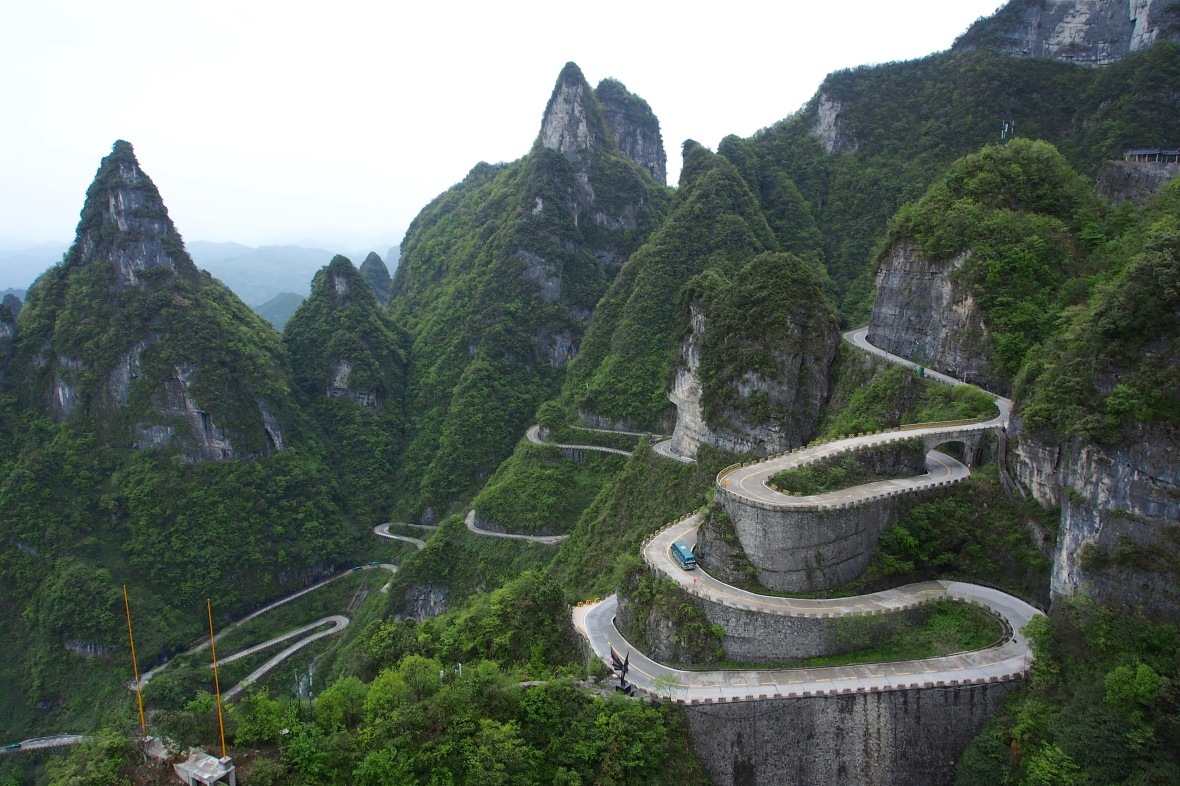 Classic shot of the road to Tianmen Mountain

The bus ride down this windy road was WILD – there are 99 sharp turns!

After a final night in Zhangjiajie City, we took our longest train yet (20 hours!) to Kunming, our last stop in China. Out our window, we saw small villages tucked into steep mountainsides and valleys transformed into communal rice paddies. Rural China, at least the part that we were able to see, is really beautiful.

We spent our final days in China resting, eating, and doing a lot of planning for Nepal. Kunming was a perfect place for this agenda. Being constantly on the move is exhausting, and we wanted to make sure that we were as healthy for Nepal as possible, so we were grateful to take a break in a place where we weren’t too distracted by potential daytime excursions (although there is likely plenty to do in Kunming if you wanted to look for it).

Kunming is a large city (~6.6 million), but not an overwhelming one. There is at least one large university, which brings a more international feel to the city, especially compared to the other Chinese cities we visited. This was a welcome change, particularly because we were both tiring of Chinese food. There were definitely more English speakers in Kunming as well. We stayed near Green Lake, where there are plenty of restaurants, markets, and pleasant walking streets. Groups of locals dancing and practicing tai chi can be seen by the lake.

China truly has a lot to offer travelers who are looking to get off the beaten path of Western tourism, and while there was much that we really appreciated about our time in China, we both felt ready to wrap it up and turn our attention fully toward Nepal. Have other questions? Shoot us a message/comment, we’d be happy to share more of the lessons we learned while traveling in China (there were many).

5 thoughts on “Exploring the Parks of Southern China”