From the sandy beaches to the steep mountains, in tapas bars and outdoor cafes, from small family run flamenco shows to some of the biggest dance clubs in Europe, Spain’s diversity is brought together by a shared identity – a dedication to living “la buena vida,” the good life. Our adventure in Spain began in the north, in Basque country, with three magical nights in San Sebastian, one of our favorite towns in all of Europe. The charming “Parte Vieja” (old town) immediately captured our hearts with its wide selection of delicious pintxos, narrow stone streets, and vibrant night life.

The beaches of San Sebastian

In San Sebastian, there are two main sandy beaches where tourists walk, swim, lounge (Playa de la Concha) and surf (Playa de Gros), and there is a wide waterfront boardwalk which is perfect for taking in the sunset and watching street performers by night. The food scene is amazing, with perhaps the most michelin star restaurants per capita as well as dozens of affordable pintxo bars. These famous bars are literally piled high with fresh pintxos – small tastes of Basque cuisine. 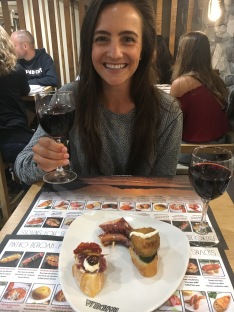 You walk in, order your drink, grab a plate, and choose your pick from the delicious piles of snacks until you’ve had your fill. The best part? A glass of tasty vino (tinto or blanco) will only cost you 1-2 Euro, and each pintxo is typically 1-2 Euro as well. The culture is seafood heavy, lots of fish, octopus, and crab, and another favorite specialty is acorn-fed ham (Jamon Iberico). You’d be amiss to leave Spain without indulging in at least a few forms of Jamon Iberico. We rented a car and stayed in a campground just a mile outside of town, making the visit both spectacular and totally affordable. 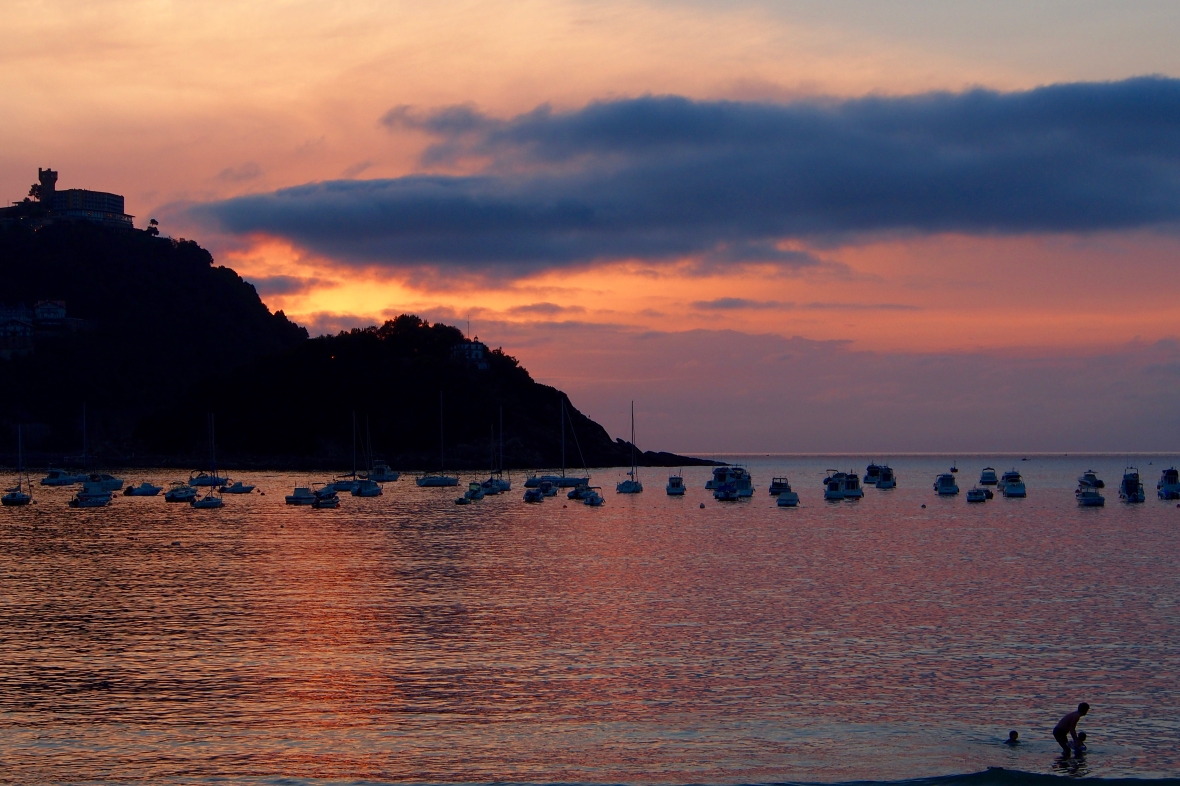 Next, we decided to dip into the center of Spain to visit Madrid, and in order to break up the drive, we stopped midway for one night in Aranda de Duero, a small village in one of Spain’s many wine regions. If you are into wine, this town would be a great stop, but be sure to plan ahead. You can tour and taste at most of the local wineries, but because it’s a bit off the beaten tourist path, you often need reservations. And be warned, many establishments will be closed Sunday and/or Monday, and most also close daily between 2pm-4pm. However, with a little research and planning, you’ll be sure to have a good time.

En route to Aranda de Duero, we transitioned from Basque country to “Castilla y Leon” – meaning the land of castles, and it’s easy to see why. The hillsides of the region are not only covered in vineyards, but are often topped with a castle as well. 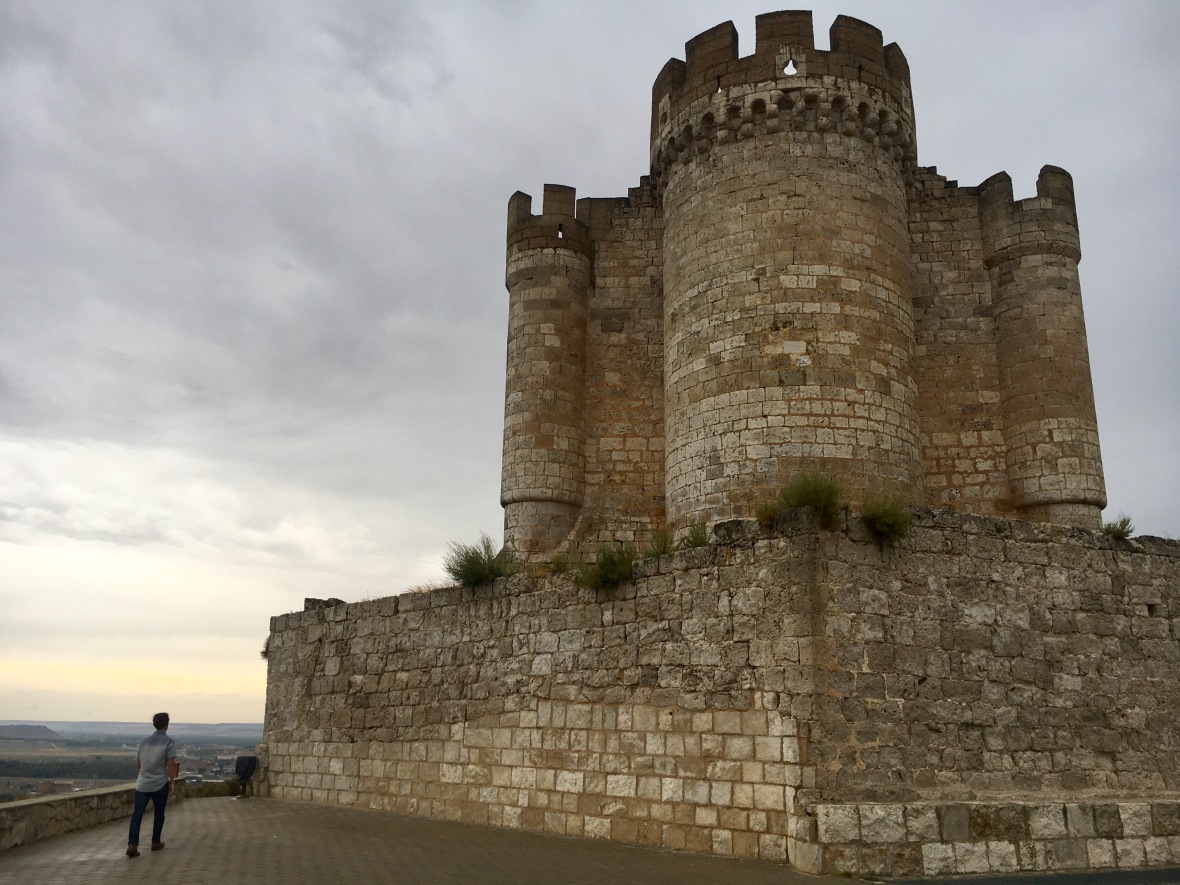 One more quick drive and suddenly, we were in Madrid. We spent our first afternoon snacking and drinking our way through town, visiting the notable squares Puerto del Sol and Plaza Mayor. On the edge of Puerto del Sol, we stopped at La Mallorquina, Madrid’s most famous bakery (http://pastelerialamallorquina.es/), to indulge in delicious Napolitanas (only 1 Euro and delicious, a must try!). We also sipped cool, tasty gespacho and tried the popular Spanish snack of pigs ears (not our favorite, but when in Spain, right?). When you order a drink in Spain, most bars will also provide some kind of small snack free of charge. However, if you’d like something more, most also have a separate tapas menu or display of pintxos behind the bar. Our favorite tapas bar of the evening was Txakolina – both affordable and delicious.

We weren’t thrilled with the popular snack of pigs ears

Our second day in Madrid, we saw more of the city via an enjoyable jog down the Manzanares River. From the abundance of running paths along and near the river, you can visit scenic Casa de Campo park and also catch views of the Royal Palace of Madrid and its gardens.

Running the Manzanares River was a great way to see Madrid!

Once again, that evening we tapa-ed and vino-ed our way through town (they should be verbs), but this time visiting slightly different neighborhoods near Buen Retiro Park and the hotel district. The streets near Buen Retiro provide a window into the late night culture embraced by the Spaniards. Sidewalks are lined with outdoor cafes where locals and tourists alike will laugh, drink, and eat until early hours of the morning every day of the week. You’ll maximize your enjoyment of Madrid if you adopt the late night Spanish lifestyle: dinner begins around 9pm and the fun will continue for as long as you stay out. 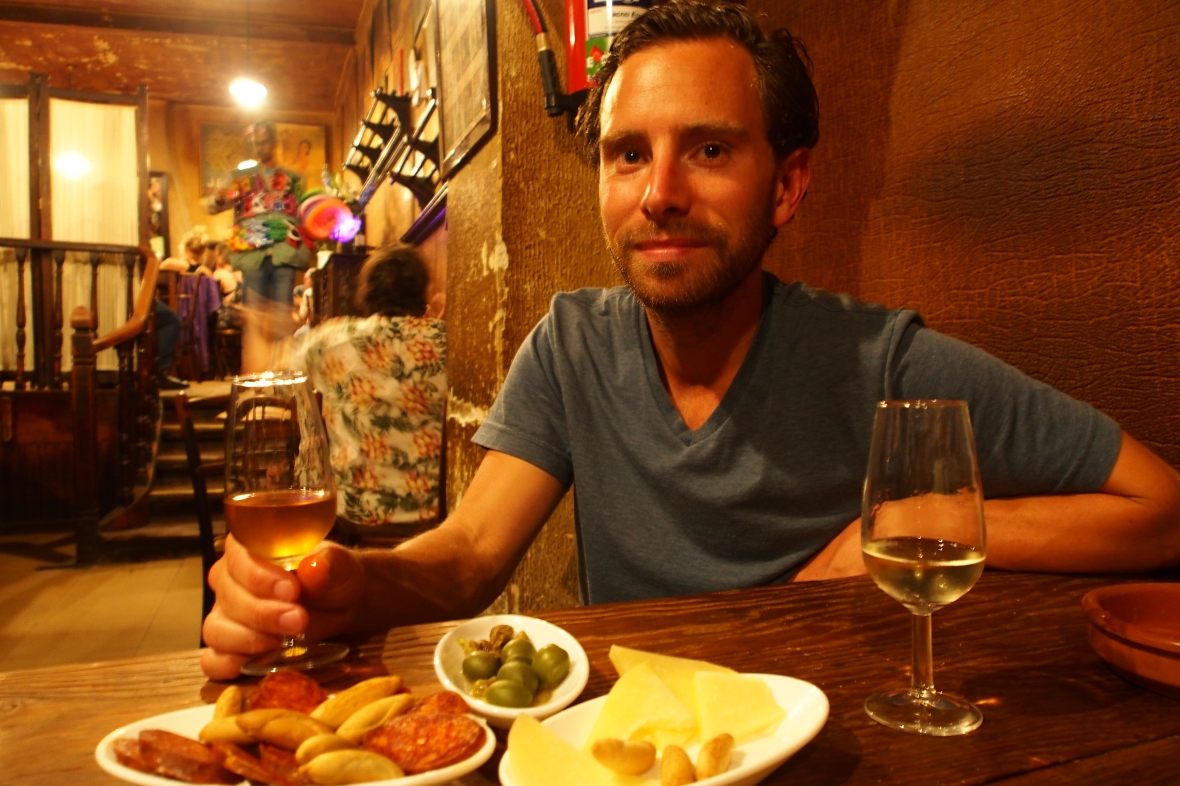 We eventually found La Venencia, probably our favorite bar in Madrid in spite of the fact that they only serve sherry wines (sweet). The place has an antique, musty vibe, probably because of the many vintage sherry bottles stacked behind the bar, and the bartender looked like some kind of surly Spanish pirate. Each drink comes with a truly tasty snack of nuts, meats, cheeses, or olives, and the place was seriously affordable. If you’re in Madrid, this place is definitely worth a stop.

Aging to perfection, ham hocks decorate the ceilings of most Spanish restaurants and bars

Following a week long dip into Portugal (see post here to learn about our Portuguese adventure), we returned to Spain for two nights in Seville, where we found ourselves with more tapas, hotter temperatures, and of course, flamenco. Seville is the home of the unique dancing style, so what better place to enjoy a flamenco show! We went to Casa de la Memoria, an intimate venue that hosted wonderful performers including male and female dancers, a guitarist, and a vocalist.

Especially in Southern Spain, horses are celebrated as part of the culture. In Seville, beautiful Andalusian horses are ready to take you all around town!

South out of Seville, we made a quick stop in scenic Arcos de la Frontera and continued on to Ronda, the hill top city known for it’s Nueva Punta, the 18th century 120 meter tall stone bridge. The hostel we stayed at was below the city, next to the stream that runs down from the bridge. It was perfectly situated for watching the sun set against the huge cliffs and tall bridge. 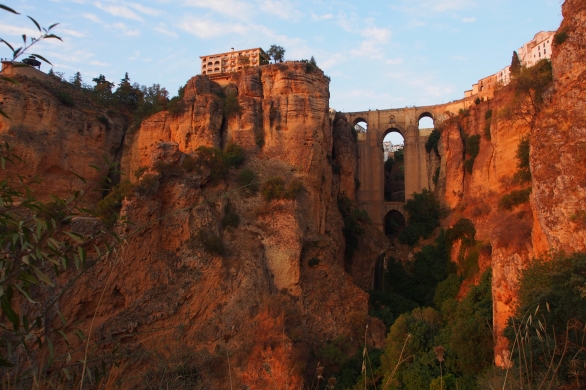 After a morning run up the Ronda hill, we headed east to Granada to check out the spectacular Moorish architecture. The city is steeped in history, at times a blend of three cultures, and at other times, a clear clash of religious differences between the Christians, Jews, and Muslims. There remains a beautiful mix of buildings, as each group prospered and built over the previous palaces and churches. The highlight is the Alhambra, a stunning Muslim palace that was once the home of the most powerful people in Europe. The intricate detail in the wood, the gardens, the style, and the paintings all remain mostly in tact, making it the most popular attraction in all of Spain. 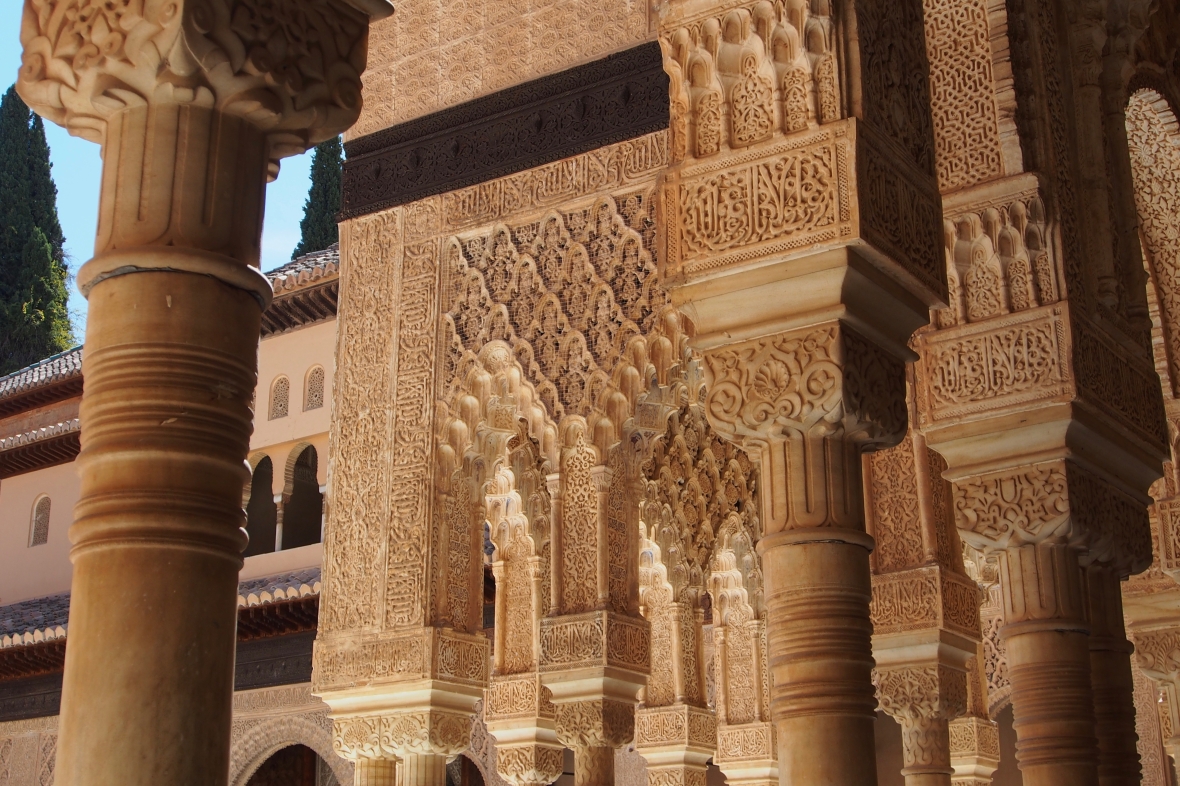 Intricate details cover all surfaces of the Alhambra, the impressiveness cannot be overstated 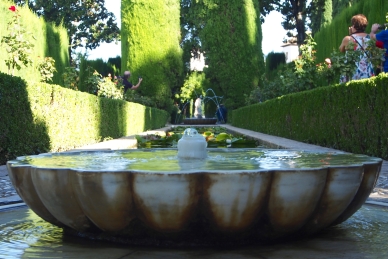 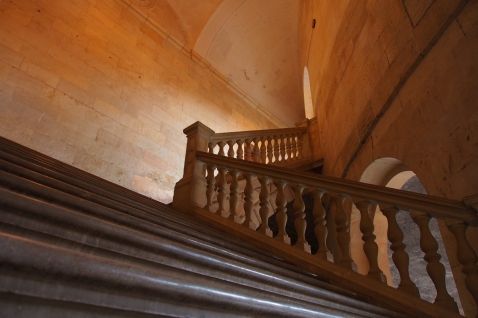 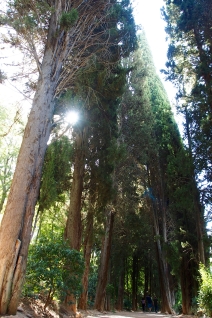 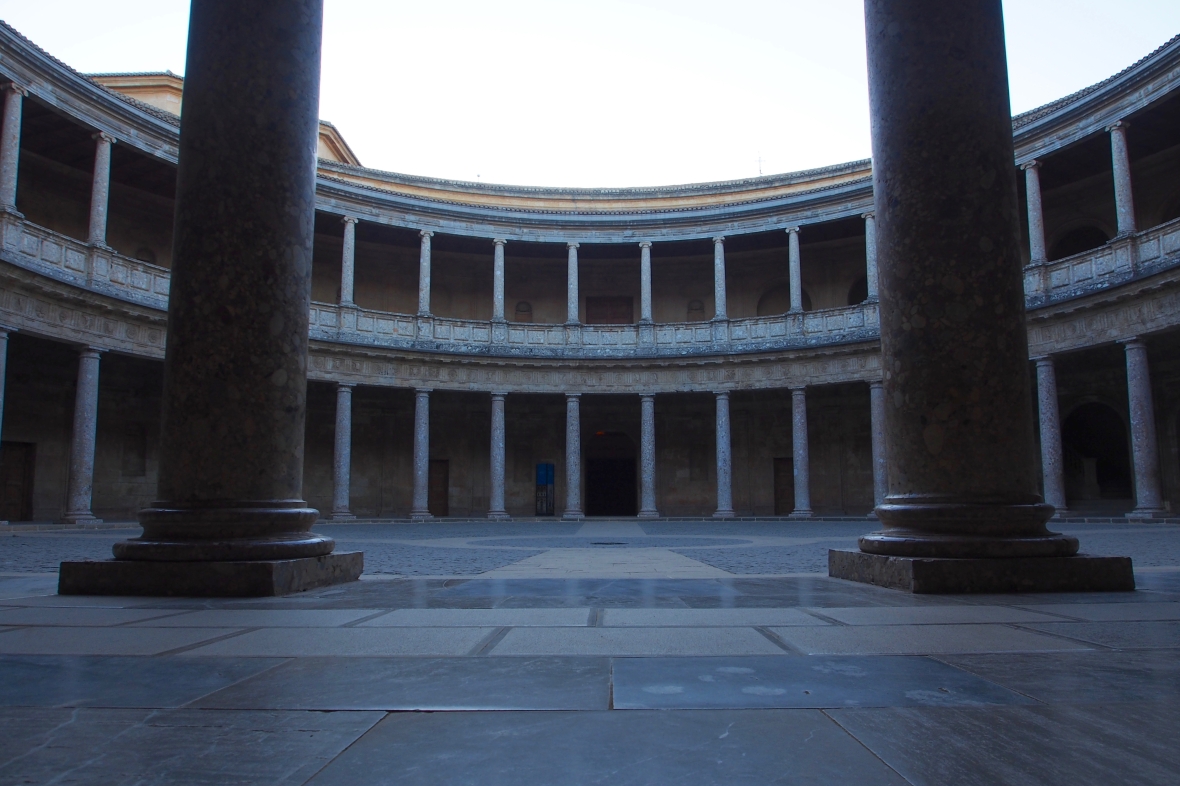 The Palace of Charles V was a sharp contrast to most of the Alhambra buildings.

After the 6 hour Alhambra tour (be sure to book tickets ahead of time!), we headed east toward Valencia. To break up the drive, we stayed at Casa Perez, a great refuge for travelers seeking respite from crowded hostels, busy cities, or popular party towns along the coast. The ex-pat couple who own and manage the Casa, are previous chefs and bartenders, so their optional $8 home cooked meal is one of the best values for a great dinner we’ve found. Plus there are palm trees, a pool, and a hot tub – super chill.

On to Valencia, the once great port city turned tourist town. On one side of town, you find beautiful old buildings, the cathedral, and a fresh market. At the other end, you find some of the most modern buildings in Europe. The city was once divided by a river, which has since dried up and has been beautifully converted to a long, grassy park. The city’s MANY runners take advantage of this riverbed park and its trails that take off in every direction. The beach is long, sandy, and in September, not crowded at all, despite the 80 degree late summer days.

And the grand Spanish finale – Barcelona! We were lucky enough to meet Connor’s brother Sean and his girlfriend Katherine in Barcelona for three whirlwind nights. Barcelona has a lot to offer – history, fabulous beaches, great food and bars, and top notch nightlife and clubs. We tried our best to do it all, and here are the highlights.

Strolling La Rambla to get a feel for the city

La Sagrada Familia is easily the most beautiful and unique building we have yet to witness. Designed by the beloved Spanish architect Antonio Gaudi, the masterpiece is still being built and is the shining star of Barcelona. You simply must see it. 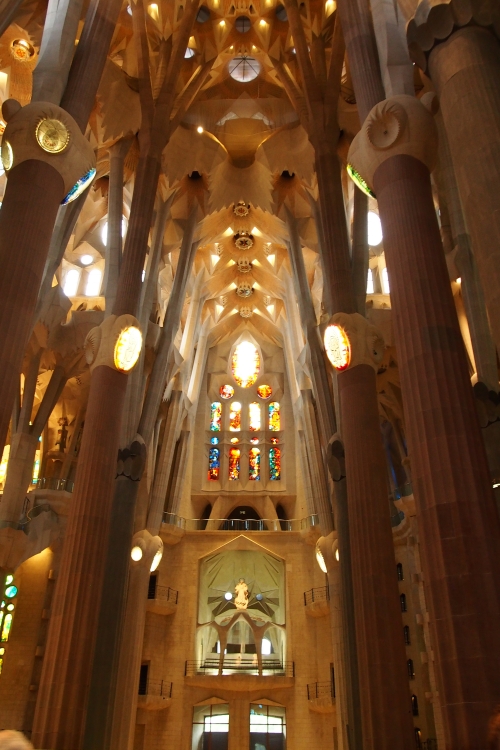 The hallmark pillars are designed to remind one of tall trees in a forest, branching outward and allowing in slivers of light toward the top. Their size is impressive (75 meters at the highest point) and is not done proper justice by this photo.

Every stairwell and hallway of La Sagrada Familiais captivating

In stark contrast to the magnitude of the pillars, details such as this tiny cross grab one’s attention

Local dishes like paella and sangria can (and should) be enjoyed from most restaurants. Jamboree was probably our favorite nightclub – multiple levels including a DJ with a live drummer. Top it all off with a stroll along the beach and a walk through the market and you’ve got Barcelona in a nutshell.

Teleferic Barcelona became known to us because of their sister restaurant in California – a delightful place for tapas, drinks, and dinner 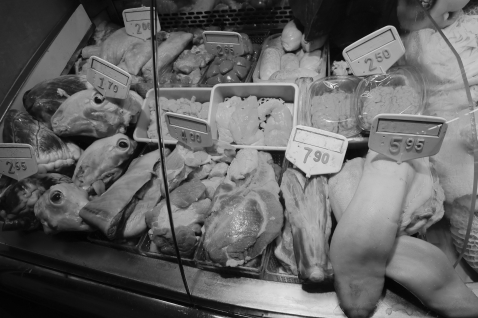 Of course, ham hocks and cured meats abound in Barcelona 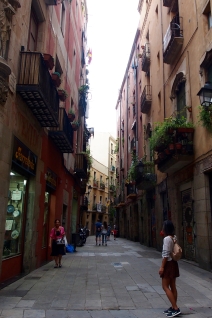 Exploring every nook and cranny

Our journey through Spain was extremely enjoyable – fascinating history, delicious cuisine and wine, fun nightlife, affordable everything, and great beaches. It’s varied regional cultures make it feel like several different countries all wrapped into one, and we can’t wait to return.