Although we weren’t sure we could do France properly on our budget, the appeal was too strong to resist… The romantic Parisian canals and cafes, the historical sites and rolling hills of Normandy, sipping wine and snacking on cheese in Bordeaux… We couldn’t say no, and it turns out, we didn’t need to. We technically began our journey across France in Chamonix – see our previous posts about our Haute Route trek for details there. Perched right underneath Mont Blanc, Chamonix is one of the quintessential European mountain towns and a must see destination of the alps if you enjoy spending time in the mountains. Following the Haute Route trek, we hitchhiked from Zermatt back to Chamonix, and at the recommendation of some fellow campers, our first destination following Chamonix was the quaint town of Annecy.

The canals of Annecy

Annecy is a bustling small town at the foot of the alps on a lovely lake, surrounded by mountains. It feels like the opening scene from Beauty and the Beast is about to take place in front of your very eyes, and we found it to be one of the most charming small towns that we had come across in Europe. In addition to the lake, where people swim, boat, and kayak, Annecy is known for its pleasant walking streets that are lined with beautiful Venice-like canals. It also has an excellent street market and a nice shopping district. We stayed at the local campground, the Belvedere, which is within walking distance of downtown. While one night was enough for us to get a feel for this fantastic little place, we definitely could have enjoyed a few days here, and you won’t regret making a stop if you’re nearby.

The canals of Annecy

In France, there are comfortable busses that can take you between major towns and cities for a reasonable price (we’d recommend using www.goeuro.com to search for transportation options), so from Annecy, we hopped a bus to nearby Lyon. 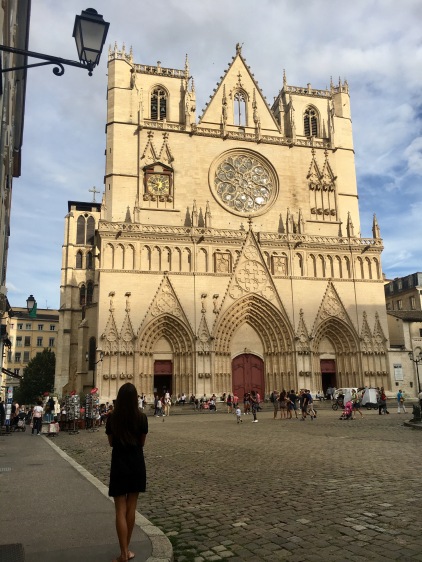 The third largest city in France, Lyon feels like a city but is also completely approachable. To get a feel for the city, we went for a run through several parks and down the riversides, where you can get nice views of the city’s old buildings and streets. Lyon is known to be one of the culinary stars of France, so we also treated ourselves to a nice dinner in a local bouchon. A bouchon is a particular style of restaurant which serves Lyonnaise cuisine (e.g., roasted pork, duck pate, sausage) in a small restaurant with an upscale and intimate cafe ambience. You can find a list of “certified bouchons” on this helpful website http://lesbouchonslyonnais.org/en/restaurants/. Like the other cities of France, Lyon has no shortage of wonderful sidewalk cafes and walking streets, not to mention your standard jaw-dropping French cathedral. After our time in Annecy and Lyon, we were really starting to gain appreciation for the French lifestyle and culture, which is centered around food, wine, art, and slowing down to appreciate the finer things in life. 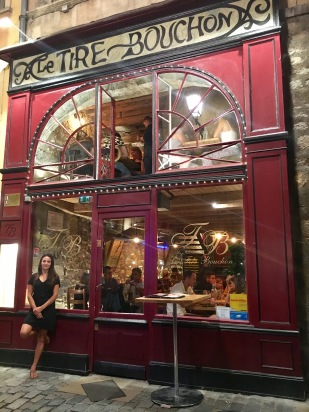 As a way to break up the bus ride to Paris, we decided to head to Dijon for one night. As you might guess, it is indeed the home of the delicious mustard which shares the same name, and in addition to mustard, Dijon offers a nice place where visitors can continue enjoying the staples of French culture: food, art (the Musée des Beaux-Arts is located here), nice walking streets and squares, wine (it is located in Burgundy, one of the primary French wine growing regions), and yep – another beautiful cathedral. Pretty typical France. Dijon was a convenient place to spend a night, wander, stretch the legs, and eat some mustard, but one night here was sufficient for us. 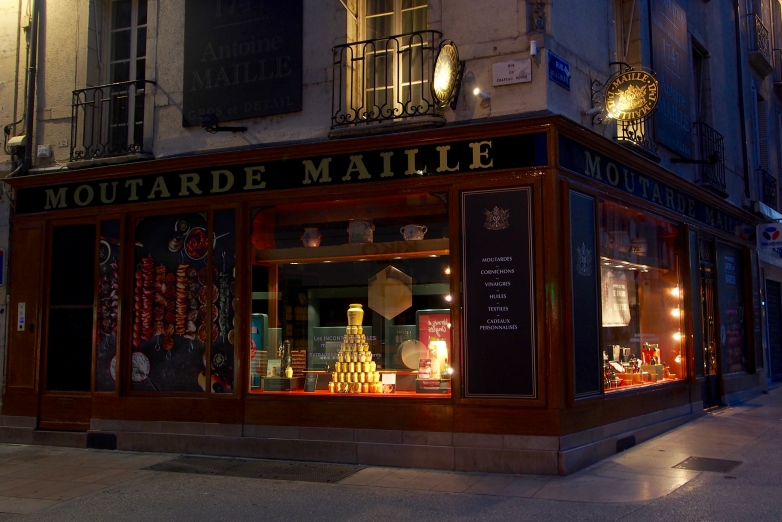 Dijon – the city of mustards

Does Paris need an introduction? Are there words that can do it justice? We were wary of attempting Paris on our budget, so we determined it would be a good place to cash in some hotel points and spoil ourselves a bit. When in Paris, right? We stayed at the lovely boutique hotel, Le Dokhan’s, just west of the Eiffel Tower, and we were not disappointed. The service was excellent, the location is hard to beat, and the decor was top notch. The intimate champagne bar is also not to be missed. 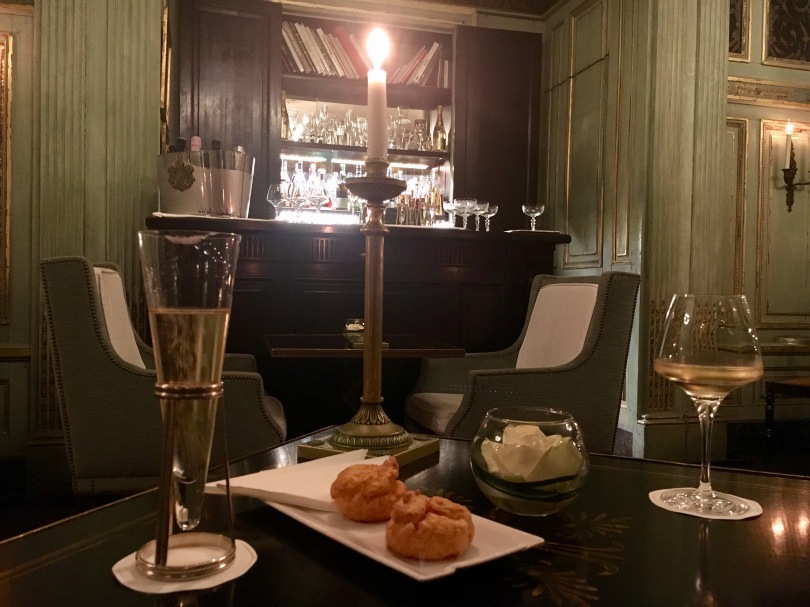 The Champagne Bar at Le Dokhan’s

We spent four nights in Paris and enjoyed every moment. Cafe’s, croissants, art, food, and wine, what’s not to love? There is literally a magnificent site to behold literally everywhere you look, and we explored many of the typical tourist attractions including the Eiffel Tower, Notre Dame, and the Arc de Triomphe. We were also lucky enough to visit The Louvre, which we found to be absolutely worthwhile in spite of the crowds. 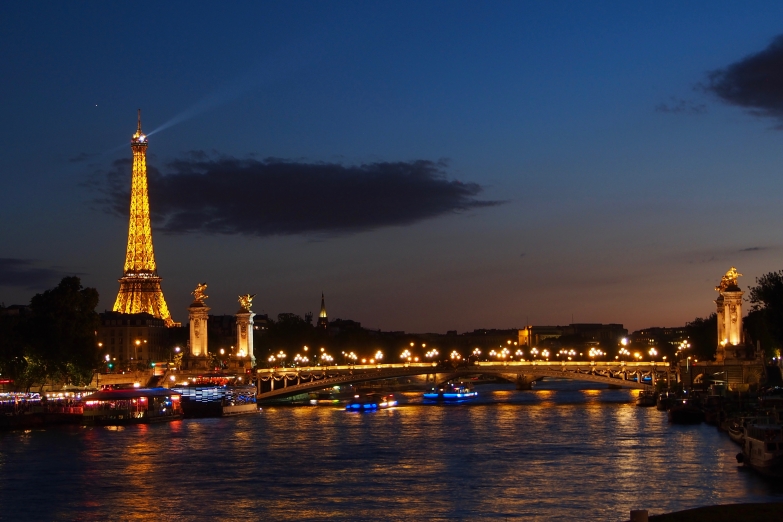 Paris – the city of light and love

The Winged Victory of Samothrace 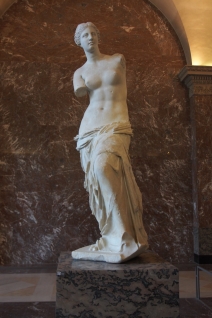 The Coronation of Napoleon

We walked most of the city but found that the metro was an easy and cheap way to get around when our legs tired. We also took a break and picnicked in the Luxembourg Gardens one day, which makes for a nice place to relax with snacks and wine. Perhaps Paris gets enough praise, but the Parisian lifestyle combined with the city’s rich history does make for an unbeatable time.

Road trip time! From Paris, we rented a car and headed west to Normandy. The car was affordable and gave us the freedom to visit places outside of the main cities without having to pay for tours. It also allowed us to camp, which helped make France more affordable. Our first stop was Bayeux where we grabbed a bite and enjoyed a short walk around town. Bayeux is small and charming, and like most towns in France, it has nice walking streets with cafes and restaurants and a beautiful gothic chapel. Bayeux would make for a good base from which to explore the surrounding sights, but we continued on to a campground just off of Omaha Beach.

When we’re not wining and dining in Paris, we’re eating lentils from a can in a parking lot

Interesting fact: European camping does not include campfires or picnic tables.

To say that we were moved by our tour of the D-Day sites would be a complete understatement, but it’s hard to describe it any other way. The whole area is one big contradiction. Normandy is a quiet, peaceful place, with green rolling hills, small farms, remote coastline, and tiny old towns, so to imagine the area fraught with the devastation that once isn’t easy, and the beaches themselves make for a similarly intense juxtaposition. To see children playing in the waves, dogs running across the sand, and families picnicking in the sun, while also imagining the tragic events of June 6th, 1944 that took place on the very same beach stirs ones emotions to say the least. 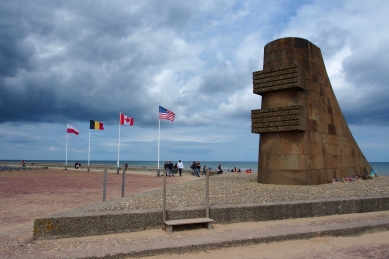 In addition to the beaches themselves, the American Cemetery is an absolute must-visit destination. Its grounds are immaculately maintained, the memorials are pristine tributes to the brave young souls who fought there, and its free visitor’s center would be better described as a historical museum. We were really impressed by the visitor’s center and would recommend it as a first stop if you want to brush up on your WWII history. It walks you through a thorough timeline of WWII events and information, and there are also impressive displays of photos, videos, ammunition and gear that help visitors feel a personal connection to the events and history. We were both instantly moved to tears. We ended the day with a visit to Pointe du Hoc, where the Army Rangers scaled the rocky cliffs to overtake the strategic area which had been fortified by the Germans. Normandy was one of the most memorable destinations of our travels thus far. 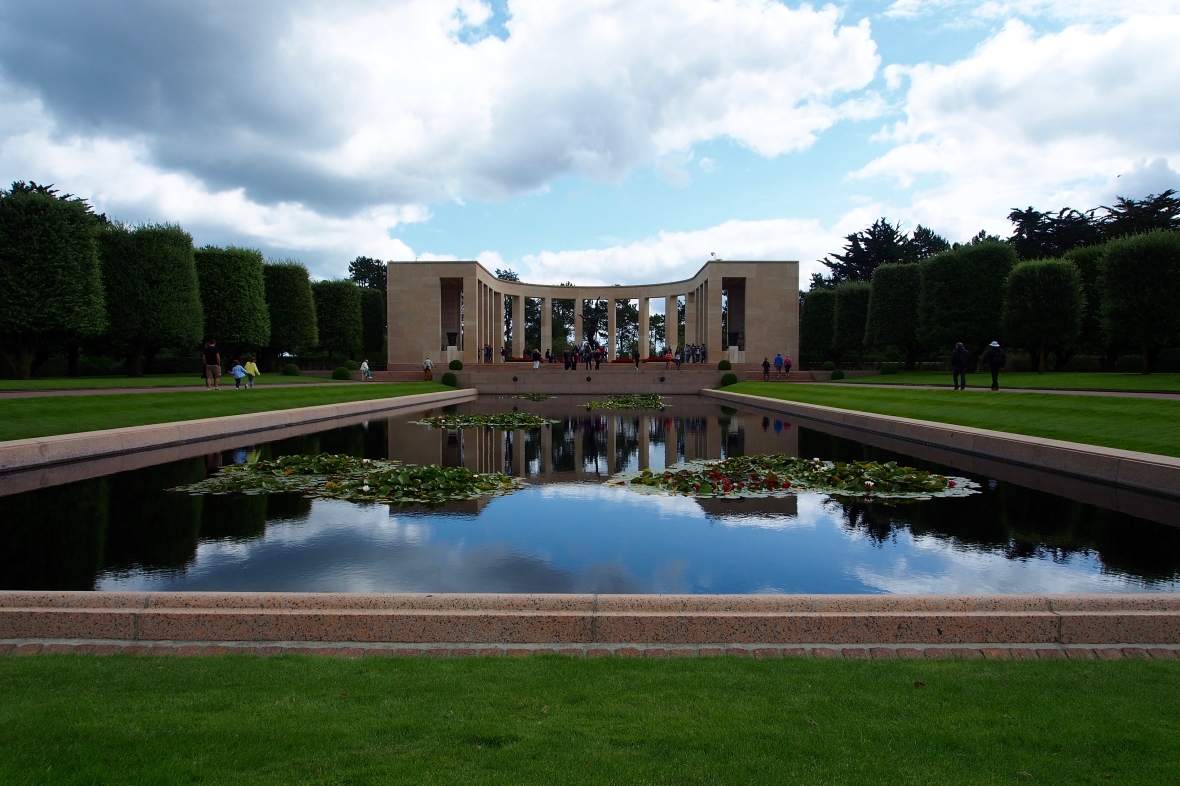 Our next stop was the unbelievable Le Mont Saint-Michel, a fortified island “commune” which consists of monastery and abbey, as well as a very small town complete with hotels, restaurants, and bars that overlook the shores. Never heard of it? We hadn’t either, but if you’re anywhere near Normandy, it’s truly a sight to behold. We camped nearby and toured the island in the evening light – pure magic. The place looks like a Disney castle but has a very real, deep history. You can wander the tiny streets of the “town”, relax in a cafe that overlooks the fortress walls, and if the tide is out, you can walk around the island and enjoy the sandy flats. A heads up: Mont Saint-Michel is best enjoyed in the evening after the crowds of day visitors leave (after 6pm). 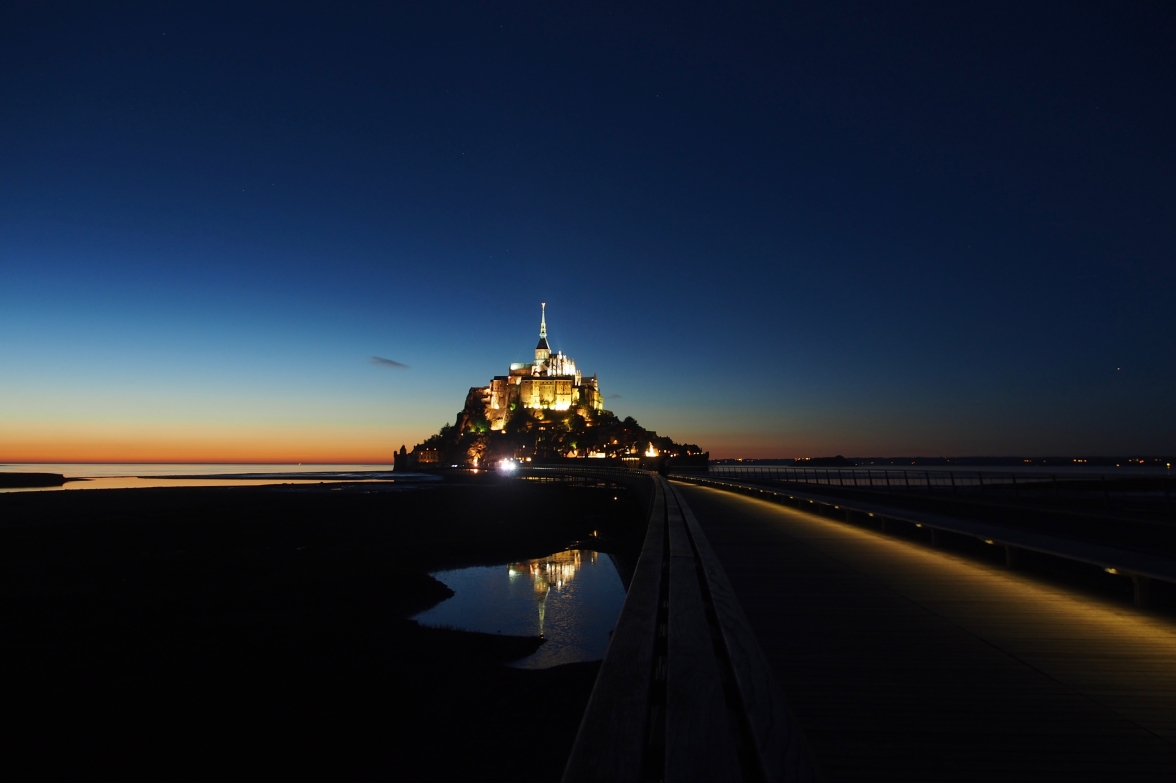 And the grand finale…Bordeaux! The Bordeaux region is just as beautiful as you would expect – tiny, old towns tucked in between rolling hills of vineyards. Although we didn’t have the funds to indulge in fancy winery tours and tastings, we still enjoyed two nights in downtown Bordeaux wandering the walking streets and riversides. Our most memorable experience in Bordeaux was the scene of riverside nightlife. In the evenings, it seemed as though the entire town came down to the boardwalk to picnic on the lawns. This, is France in a nutshell: the historic palatial buildings behind the river light up with a golden glow, kids run and play in the reflecting pools and fountains, and small groups of people everywhere uncork bottles of wine, eat cheese and baguettes, smoke cigarettes, and play music. The cashier at the nearby grocery store opened our bottle of wine for us and asked us if we needed cups… Enough said. France really lived up to our high expectations and Bordeaux was a perfect way to wrap up our trip. 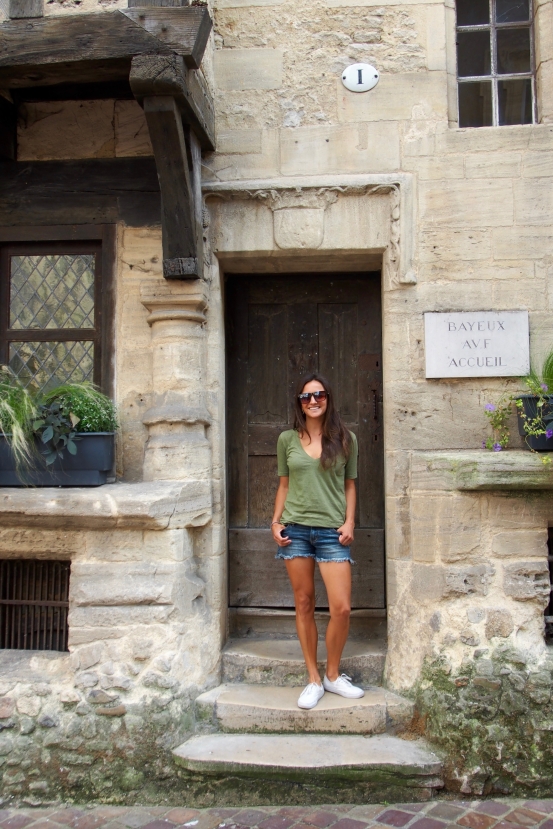 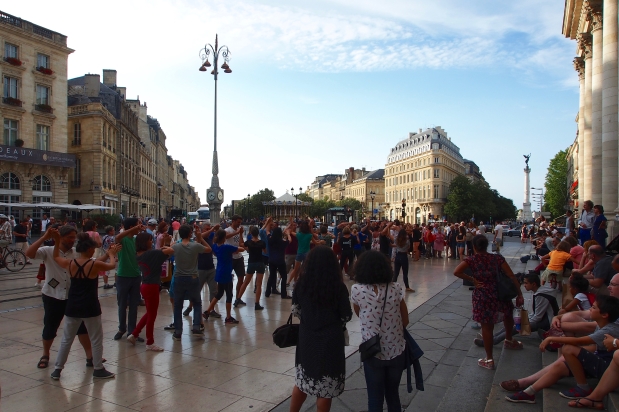 Dancing in the streets of Bordeaux

Bordeaux picnic by the river